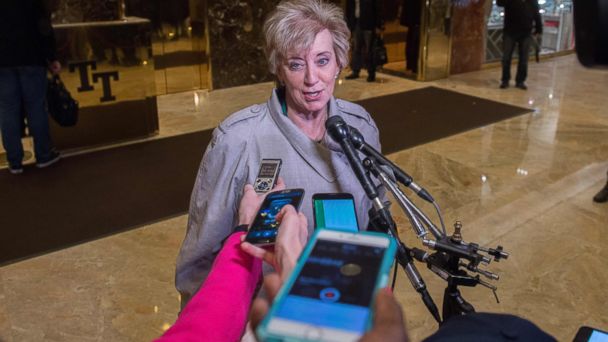 "My America First agenda is going to bring back our jobs and roll back the burdensome regulations that are hurting our middle-class workers and small businesses. To help push our agenda forward, I am pleased to nominate Linda McMahon as the head of the Small Business Administration," Trump said in a statement announcing the pick. "Linda has a tremendous background and is widely recognized as one of the country's top female executives advising businesses around the globe."

McMahon, who met with the president-elect at Trump Tower last week, was the co-founder and former chief executive officer of the WWE franchise. She unsuccessfully ran for the U.S. Senate in Connecticut in 2010 and 2012.

Linda McMahon, along with her husband, Vince McMahon, the chairman and CEO of WWE, was among the most prolific donors in the 2016 election cycle, according the Center for Responsive Politics. The couple gave more than $9 million to candidates, parties, and political action committees and outside groups this year.

Trump has appeared on WWE programming in the past and was inducted into the WWE Hall of Fame in 2013.

In an interview with Yahoo News in May, Linda McMahon, who initially supported Gov. Chris Christie, R-New Jersey, for president, criticized Trump for making disparaging comments about women but still expressed faith in his ability to lead the country should he become president, saying "he will hire good people for advice."

"Those [comments] were just over the top; they were deplorable, objectionable absolutely," Linda McMahon said. "He's not helping, certainly, to put women in the best light. Maybe he regrets them, maybe he doesn't. I realize he punches hard when he punches back, but that's just over the top. I wish that no candidate would make those comments."

"He is the front-runner, and I think he surprised a lot of people," Linda McMahon said. "He really is a vessel of this angst and unrest in this country. He said it straight out, didn't worry about being politically correct. ... I think that really is a seed of a great deal of his popularity. I think Donald has proven himself in a lot of areas to be an astute businessman. ... I think that he will hire good people for advice."