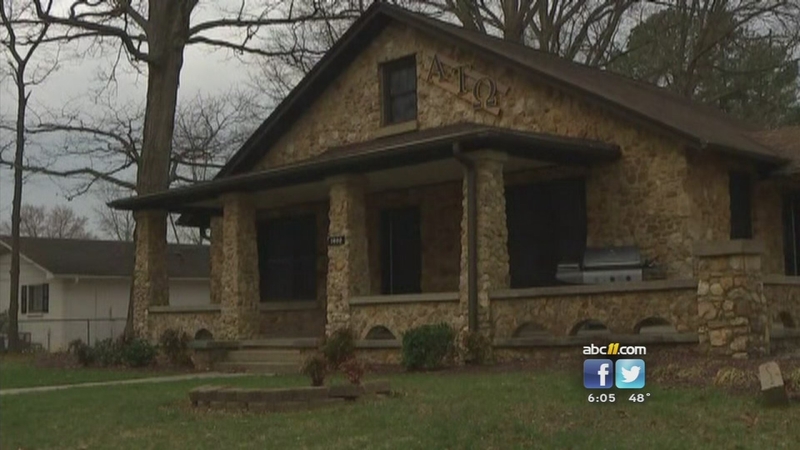 RALEIGH (WTVD) -- The North Carolina State University fraternity house where a woman claimed she was sexually assaulted is now part of a drug investigation.

ABC11 has learned that Alpha Tau Omega has been suspended from campus.

The fraternity first found itself in the news earlier this month after NC State police alerted campus that a student reported being assaulted at Alpha Tau Omega fraternity house on March 1.

The incident allegedly happened during a party at the Varsity Drive home.

An university spokesperson told ABC11 that the decision to suspend ATO from campus was made two days after the victim filed the complaint with campus police.

According to search warrants, the woman who reported the assault told police one of the brothers was dealing cocaine, ecstasy and acid.

The accuser also told police she witnessed several physical assaults, including one person being thrown out of a window.

Authorities have searched the fraternity house, which is located on school property. Alpha Tau Omega leases the space.

According to the warrant, officials seized a number of items including white powder and a scale.

ATO's CEO Wynn Smiley spoke with ABC11 about the allegations.

"It's devastating for the organization's reputation," said Smiley. "It's very unsettling and it's too bad this has all happened."

He says all of the items police found belong to a pledge who was living at the house.

"We kicked the kid out who's the focus of the police, and we're working with the university now through their investigation process," said Smiley.

ATO says they completed their own investigation into the claims and they believe the accuser is lying about drugs being sold at the house and being sexually assaulted.

"What she claims what happening in the chapter house was not happening," said Smiley. "This woman's claims to police that she saw all kind of drug activity going on in the house, we believe that to be at best wildly exaggerated and in many cases, fabricated. Her credibility throughout this whole process has been certainly in question."

No arrests have been made at this time in connection with the two investigations.