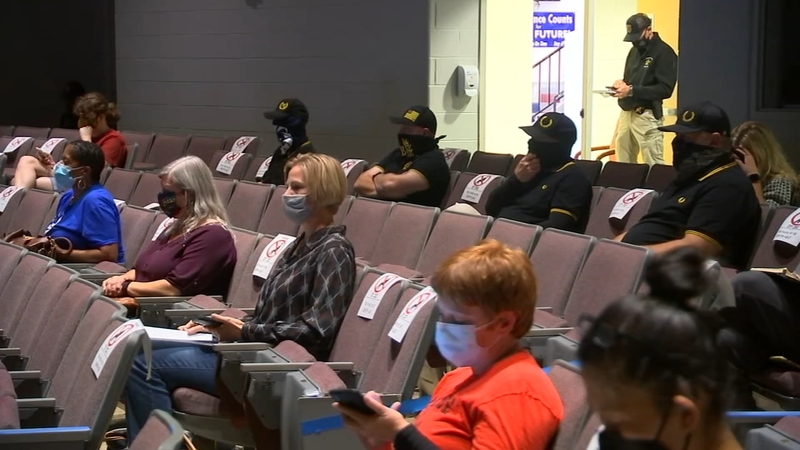 ORANGE COUNTY, N.C. (WTVD) -- Amid an ongoing clash over mask mandates and COVID-19 safety at Orange County schools, a battle has drawn the attention of far-right extremist group, The Proud Boys.

Monday night, the Orange County school board took action to address the concerns from some students and staff - passing a resolution to condemn hate groups on school property.

It was raucous from the start with the Orange County Board of Education meeting at Stanback Middle School. But the battle lines were drawn long before.

It was Friday night football on Sept. 24 that first raised eyebrows. In the roadway outside Orange High, several members of the far-right extremist group, The Proud Boys, rallied to blast vaccine mandates and mask requirements.

Some students and staff wrote the school board, saying they were afraid and felt unsafe.

Before the OCS board convened Monday, the Northern Orange NAACP and others gathered outside to support a board resolution to condemn what happened outside Orange High.

"These extremist groups have been using anti-mask rage to wedge their way into local forums -- to recruit supporters and normalize their bigotry," said Heather Redding, an Orange County social justice activist.

“These extremist groups have been using anti-mask rage to wedge their way into our local forums.” pic.twitter.com/RgxmUG1m9G

Activist Ali Braswell added, "Is this Orange County? Are we going backward, folks? We need folks to come out and stand against this nonsense."

Inside the meeting, Monday's board vote for the resolution was interrupted many times.

Several members of The Proud Boys were on hand, in their signature black and yellow, rising to speak. Some were ushered away by sheriff's deputies when they broke rules to address specific agenda items.

When the dust settled, the resolution came up for a vote.

"And therefore be it resolved that the Orange County Board of Education stands united against all forms of white nationalism and white supremacy," said OCS Board Chair Hillary MacKenzie, reading the resolution.

Tensions were high inside and out of the meeting.

Some members of The Proud Boys lingered a while in the parking lot. Some parents asked to be escorted to their cars by deputies to feel safe.

Monday's resolution includes a pledge to keep an open a dialogue about how to best protect student and staff safety when there's a presence of hate groups on property.