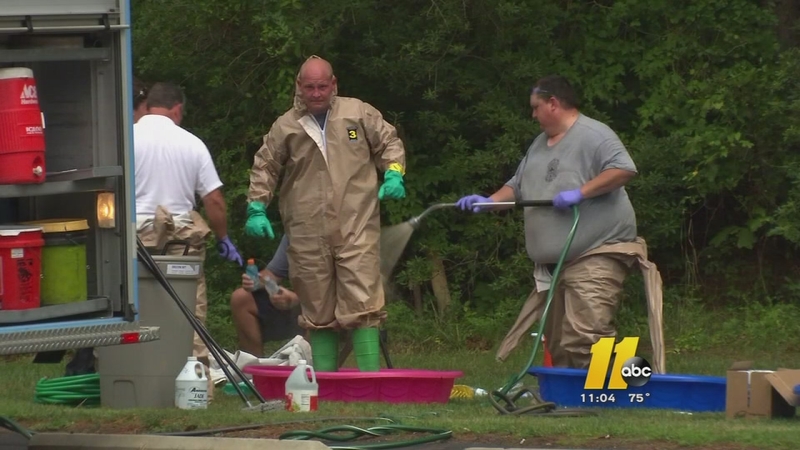 The situation was reported around 7:30 a.m. on the 100 block of Pinegate Circle.

Firefighters said the contractor used a paint removing chemical on the floor and stairwells of 11 apartment buildings "without caution to residents."

The posted notices only warned that the substance would be slippery. They warned not to touch it but did not say why.

"They sent us a notice a day before telling us that they were going to powerwash and use heavy product but they didn't say anything about the toxicity level, that it would be burning, they didn't mention any of that," said Jessica Stalling, who lives in the complex.

"It's a product called Stripper Clean, carries a pH Level of 13.5 and 7 is about a neutral pH level," said Lisa Edwards, the Chapel Hill Fire Department Public Information Officer.

Stalling's dog suffered burns after it slipped in the solution.

"She has ulcers to the throat, her tongue is burned, her back hind legs, there's hair missing from the splatter that got on the back of her legs," said Stallings.

"My dog went out at like 4 in the afternoon and I knew automatically the chemicals were bad," said Mondi.

She said her dog kept jumping around and when she examined the dog, she couldn't believe what she saw.

Mondi called management right away, but says they only told her that they couldn't do anything. So being on the third floor and not able to walk her dog down the sprayed stairwells, she called the fire department.

She said when the fire department came out to inspect, they called in a hazmat crew and, hours later, around 2 p.m., 11 buildings were evacuated.

The Regional Response Hazmat Team was called in to help deal with the problem. The management company of the apartment complex is arranging evacuation and professional clean-up of the affected areas.

Anyone who may have had contact with the chemical is asked to call the management office.

ABC11 spoke briefly to one of the property managers about the chemical used and was told that it was used properly to the best of their knowledge. We reached out for further questioning but have not yet heard back.

Meantime, management was working to get hotel rooms for those with nowhere to go for the night as residents said they could be out of their homes for the next 24 to 48 hours.