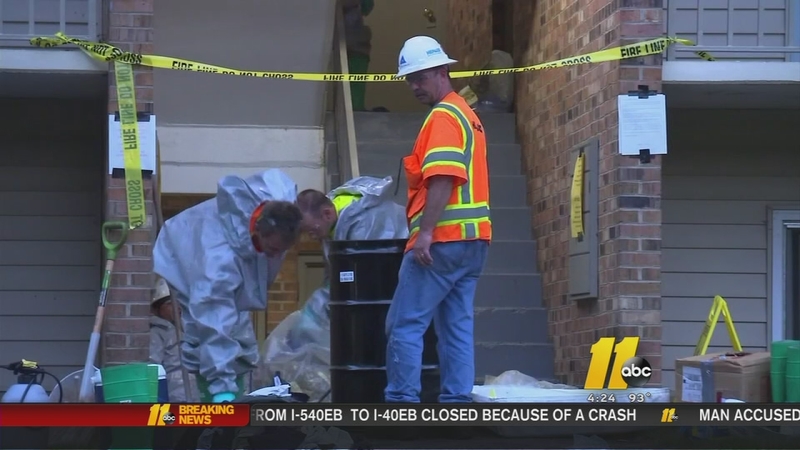 The situation was reported around 7:30 a.m. Wednesday at the Pine Gate Apartments in the 100 block of Pinegate Circle.

The Chapel Hill Fire Department said a contractor used a chemical to remove paint in 11 apartment buildings that injured 10 residents and three dogs.

Firefighters said the contractor used a paint removing chemical on the floor and stairwells "without caution to residents."

The posted notices only warned that the substance would be slippery, and warned not to touch it, but did not say why.

Resident Noelle Mondi said she noticed her dog was having issues and called management right away, but said they only told her that they couldn't do anything. So being on the third floor and not able to walk her dog down the sprayed stairwells, she called the fire department.

Mondi said when the fire department came out to inspect, they called in a HAZMAT crew and, hours later, around 2 p.m., the buildings were evacuated. In all, 128 apartment units were affected.

"I've sent some pictures in already to some lawyers," Mondi told Eyewitness News on Thursday.

"It's a product called Stripper Clean, carries a pH Level of 13.5 and 7 is about a neutral pH level," said Lisa Edwards, the Chapel Hill Fire Department Public Information Officer.

The management company of the apartment complex arranged professional clean-up of the affected areas, and is reimbursing some residents who had to stay overnight at hotels.

"They're gonna put up a fight and it's gonna take everyone working together as a congealed unit to go against this company," said Teresa Bone-Turrentine who was considering filing a lawsuit, if she could get support from some of her neighbors.

Some residents said Thursday that despite the cleanup, they are breaking their lease with the complex.

Eyewitness News has called the company that owns PineGate Apartments, GSC, but have not yet heard back.