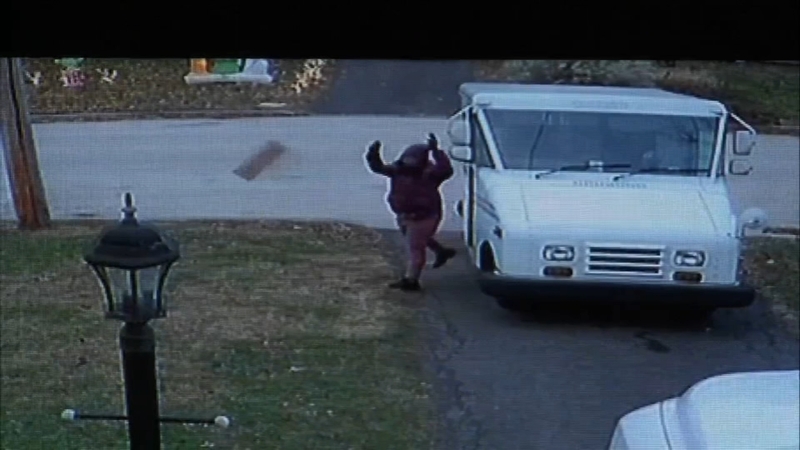 NORTH WALES, Pa. -- The United States Postal Service is conducting an investigation into a mail carrier caught delivering a Pennsylvania family's package with an underhand toss.

The family isn't just upset about the way their box was handled, they said the driver tried to place the blame on them.

Brian Simon showed WPVI surveillance video from Tuesday afternoon where a postal vehicle pulls in his driveway and the driver throws a package out of the truck window onto his lawn.

Seconds later, the driver can be seen retrieving it and returning to the truck, only to re-emerge seconds later and throw the package toward the front door of the house.

The video shows it is a two-handed heave. Simon said his wife Lisa was watching in bewilderment from inside of the house.

"She was very upset," said Simon.

Lisa comes outside of the house to confront the driver. She asked what is happening.

"Her reason for throwing the package was because my dog and two younger children were out in the front yard," he said.

Simon said a neighbor's surveillance video shows the yard was empty. His 13-year-old Sheppard was inside on the couch with Lisa at the time.

The couple was upset enough to complain to the Postal Service.

A spokesperson said officials are aware of what was on the video.

They said they have apologized to the customers and there is an ongoing investigation and, if necessary, appropriate action will be taken.

The spokesperson would not detail what those actions might be.

Simon said he was told it could include up to the driver being dismissed.