Cary woman angry after dog shot in her own backyard 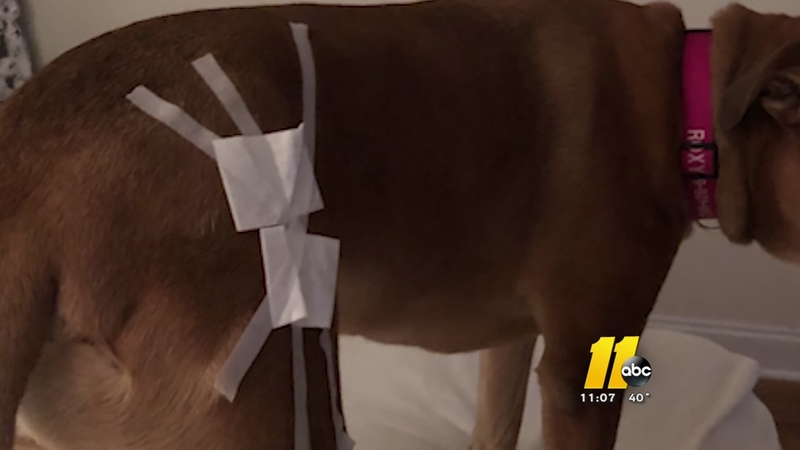 Cary dog shot in own backyard

CARY, NC (WTVD) -- The Cary Police Department is investigating after a woman reported her dog was shot while in a fenced-in yard.

Melissa Wagers said her dog, Roxy, was playing with her other dog, Milo, in her backyard at the Danbury at Regency community in Cary, when somebody shot a BB or pellet gun through the fence Wednesday, striking Roxy above her leg.

"I noticed she was bleeding down her flank and she was really timid and she was kind of laying on the floor, and then she was just kind of whimpering and then licking her wounds," Wagers said.

Melissa Wagers says her dog, Roxy, was shot with a BB or pellet gun through their fenced-in yard in the Danbury at Regency community in Cary. She shared the last two pictures from shortly after it happened. Cary Police tell me they’re investigating. #ABC11 pic.twitter.com/0D5tVuxC3c

Wagers said she saw three middle-school-to-high-school-aged boys hanging out at the pond that backs up to her house.

Shortly after, she said, Roxy had gunshot wounds.

"I'm disgusted," Wagers said. "I'm sad. I'm angry. It's very upsetting to know that we're in this beautiful community in Cary in my fenced-in yard. My dogs are out playing. It's a normal day and this is what happens."

Wagers and her daughter Shelby, 17, were inside the home when Roxy was shot.

"The fact that the kids shot through the fence on our own property, it definitely shouldn't have happened and we want to find out who did it," Shelby Wagers said.

Melissa Wagers said it has cost the family hundreds of dollars in vet bills and Roxy, who is taking several medications for the wound, may need surgery. Wagers wants whoever did this to take responsibility.