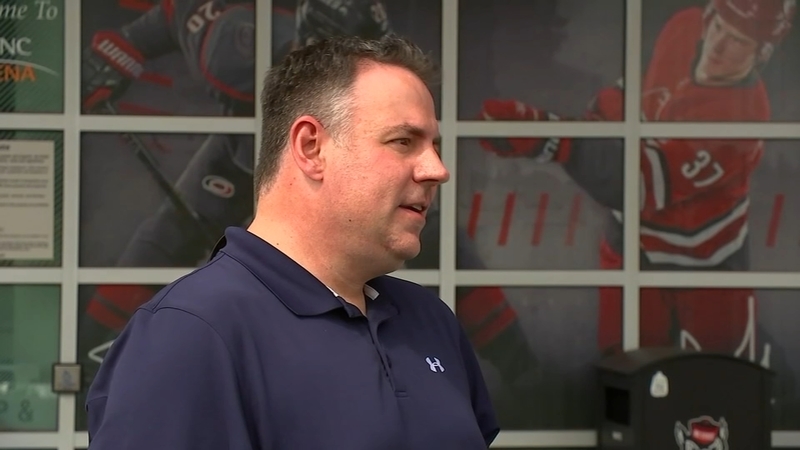 RALEIGH, N.C. (WTVD) -- Remind Mike Maniscalco of the fact that he's an actual NHL play-by-play man now and you'll get this reaction:

"Life happens and never in a million years would I have thought that this door at this level would be open to me," he said over a big smile.

A proud product of Buffalo, Maniscalco has traveled a winding road to his current dream gig. After being let go a couple years ago by 99.9 The Fan, he contemplated leaving the business.

"You start wondering, is there something else that I could do, do I want to move in a different direction? This was the opportunity to do it, but I got a call from IMG college radio, and I'm like, All right, well we'll give this one more try," he said.

That brief radio stop in the Triad though quickly turned into his first TV position with the Hurricanes, manning the pregame and ice-level reporting. It was in that capacity that he found himself in San Jose almost one year ago exactly. Stomach pain turned into an ER visit became fearing for his life.

"The exact phone call was 'I need you not to freak out, but you're going to freak out but get on the earliest flight you can get on and here's why -- they found something,'" he recalled telling his wife.

"I remember crying, and then running upstairs and throwing things in a bag," she said. "I made it to the airport from the phone call I was on a plane in one hour."

Dougie Hamilton scored a goal that night vs. San Jose and during the second-period-intermission interview dedicated the goal to Maniscalco.

"We're all thinking of him, and I wanted to score for him tonight, so I was glad I did." Hamilton said at the time. Maniscalco said the message brought him to tears in his hospital room.

A volleyball-size tumor was ultimately removed from his stomach, benign thankfully.

RELATED: 'I'll never get over this': John Forslund on life after Canes

"When it comes to hockey voices, I think he's No. 1, so I understand what I'm replacing but at the same time, I can't be him. I can only do the job the way I can do it," Maniscalco said.

When Hurricanes hockey returns next year is uncertain. One thing is guaranteed though - Maniscalco will be over the moon to be calling the games.

"In the words of my dad -- 'If they open up the door, you better walk through it because somebody else will if you don't,'" Maniscalco said. "Mike Emrick gave me the best advice ever. I was like, 'what do I do now?' and he goes, 'just tell them what you see.'"
Report a correction or typo
Related topics:
sportsraleighhockeycarolina hurricanestumorbloghockey fanunemployment
Copyright © 2022 WTVD-TV. All Rights Reserved.
TOP STORIES
Snow expected overnight Friday into early Saturday morning
Former NCSU footballer Torry Holt named to NC Sports Hall of Fame
Durham police issue warrants for suspects in hit and run crash
Two high school seniors receive surprise early graduation
Biden confirms he will nominate first Black woman to SCOTUS
'It's difficult': Clayton ICU nurse remains hopeful despite challenges
Change being made to Holocaust curriculum in NC public schools
Show More
Frigid temperatures leave Durham families in the cold
LATEST: N95 masks expected to arrive at CVS, Walgreens
Here's why thousands of NC employees still are not working
Brazen burglary of Raleigh shoe store caught on camera
Family of murder victim hopes billboard leads to arrest in case
More TOP STORIES News