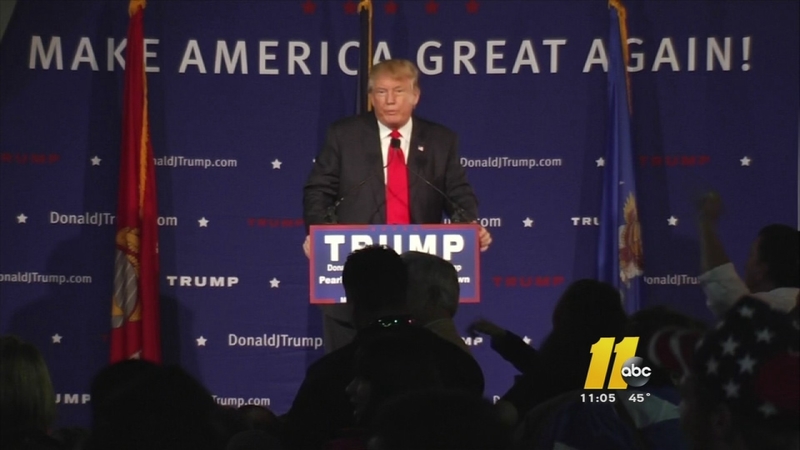 Trump tells Walters we have to do the right thing

Republican presidential frontrunner Donald Trump is sticking by his call for a ban on Muslims traveling to the United States. He defended that call in an interview Tuesday with ABC's Barbara Walters.

When she asked him if he regrets what he said since many are calling the announcement un-American, he replied, "Not at all. We have to do the right thing. Somebody in this country has to say what's right. I have great respect and love - I have people I have tremendous relationships with, they're Muslim and Barbara, they agree with me 100 percent."

Trump's proposal is resonating with some in the Triangle as his popularity is surging in North Carolina. A new poll from liberal leaning group, Public Policy Poll shows his presidential run is getting stronger.

Shadi Sadi is a father of three, born in Raleigh and a Muslim American. When he heard about Trump's plan to ban Muslims from traveling to the U.S. he couldn't believe it.

"What is this, Hitler? Should I just wear my ID badge now?" Sadi said.

For him, Trump's plan to fight terror that way is like cracking open a very scary door of history. He believes Trump's call to ban incoming Muslims is only adding fuel to the divisive fire already sparking in America.

"My wife is going out in public and she's getting mean stares," Sadi said. "That is the division that Donald Trump's creating. That he keeps engaging in this hate speech and it's an 'us versus them' speech."

Despite the backlash Trump is getting for his announcement from opponents on both sides of the aisle, new numbers from PPP show he is gaining support in North Carolina. That support now stands at 33 percent over the other Republican candidates for president. That may not sound like much, but it's more than double the support he had during the summer.

Raleigh resident Rosanne Sinatra is in that 33 percent and attended Trump's rally in Raleigh on Friday.

"I really truly believe that Mr. Trump has tapped into the collective consciousness of 'We the People'," Sinatra said. She went on to say that it is no surprise that Trump is gaining support because for her he has re-ignited her hope for America and she appreciates that he says exactly what he's thinking.

"I feel like he's the only talking about the elephant in the room."

And when asked how she feels about the backlash he is getting over his call to ban Muslims from entering the U.S., she echoes what Trump said in his interview with Barbara Walters, "What he's saying is he wants to temporarily close the door so that everybody can get their stuff together."

While Trump leads the Republican presidential race in North Carolina with that 33 percent of support, that same poll shows Hillary Clinton leading the Democratic race at 60 percent.

ABC11 also reached out to the North Carolina Republican Party for comment on the new poll numbers and Trump's gaining popularity, but was told it refrained from making comments about individual GOP campaigns during the active primary season.