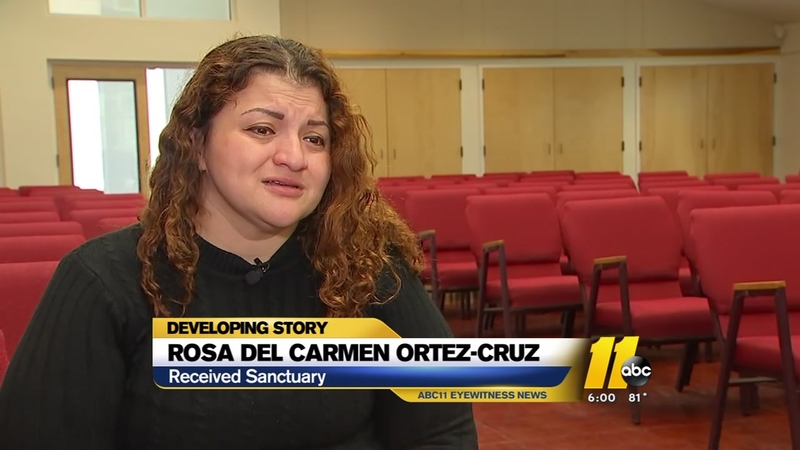 Alongside Pastor Mark Davidson at Church of Reconciliation, the congregations are working together to provide shelter to Rosa del Carmen Ortez-Cruz.

"I fear for my life returning to Honduras. I have four kids who need me," said Ortez-Cruz as she fought tears.

In 2002, Ortez-Cruz fled Honduras after facing domestic violence from her partner. She said she was stabbed, forcing her to the hospital for a long-term stay as she recovered. Those injuries, came with a threat of further violence.

Following the attack, she left with her son.

"My kids deserve a future without fear," Ortez-Cruz said.

After spending four years in Washington, DC, she moved to North Carolina where she's lived and worked in the Greensboro area for the past 12 years.

Now with four children, she enjoys the tranquility of North Carolina. But a recent ruling by an immigration judge denying her bid for refugee status - coupled with increased ICE scrutiny - has forced her to seek shelter.

"I miss my family. I want to be free, go outside. But I'm appreciative of the support," Ortez-Cruz said.

He added that there is "panic" in the undocumented immigrant community about recent reports. A spokesperson for ICE confirmed the agency made roughly 40 arrests statewide last week, with about 25 of them in the Triangle.

While recent reports have garnered attention, the official said there was not anything new about the agency's presence.

"ICE makes targeted arrests on a daily basis in accordance with its ongoing enforcement activity. The general premise some seem to be suggesting that ICE's presence in North Carolina is a new development is not accurate," ICE wrote in a statement.

The spokesman added that arrests are made on a case-by-case basis, saying that "ICE continues to focus its limited resources first and foremost on those who pose the greatest threat to public safety and any suggestions as to ICE engaging in random or indiscriminate enforcement are categorically false. ICE does not conduct any type of indiscriminate raids or sweeps that target aliens indiscriminately."