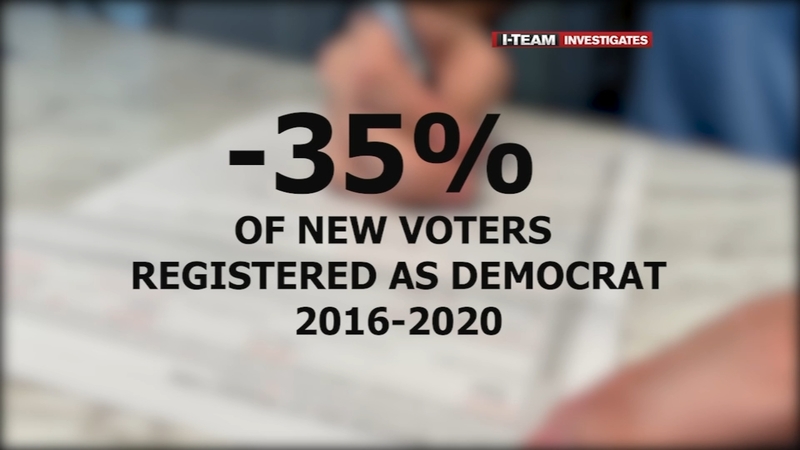 As the polls remain close between Joe Biden and President Trump, the ABC11 I-Team is looking at how voters in North Carolina have changed over the last four years.

President Trump won North Carolina by 173,315 votes back in 2016. The new voters added to the state since then make up more than double that gap and can likely make a huge impact.

RELATED: Pandemic aside, campaigns shake up gameplan with so few undecided voters left

The Democratic Party has held the largest share of North Carolina voters for years, however since 2008, the share of voters has declined by 10%.

"In North Carolina, like many other southern states, there's this long history especially among the older generation of white voters of being registered as a Democrat, often times still voting for Democrats in local and some state elections but voting for Republicans in National races," Greene explained.

Greene said the decline in registered Democrat voters in recent years is partially due to this older generation dying out and getting replaced by voters who more accurately register.

"So that decline in Democrats does not necessarily reflect how we can expect the Democratic Party to perform in elections for president and Senate," said Greene.

In contrast, more than 108,000 new voters registered with the Republican Party in the last four years, according to NCSBE data. Despite the increase, the party has also lost close to 2% of its share of North Carolina voters.

Instead of traditional parties, more voters are choosing to register as unaffiliated. More than 363,000 people have registered as unaffiliated since 2016; three times more than newly registered Republican voters. Unaffiliated voters have increased by 11% since 2018 and now account for a third of all North Carolina voters.

"I just think for a lot of individuals there is an image of a new democracy that doesn't look like the traditional two party system, that doesn't look like the representation of those wealthy land-owning individuals but more so fully embrace that America needs a democracy that is 21st, 22nd century where everyone is included," said Marcus Bass, the executive director of Advance Carolina.

His nonprofit organization works to increase political power in Black communities across the state. Over the past few months, Bass has worked to increase voter registration. He said he's seen the preference to registered as unaffiliated first hand.

"Well in this system we are still trying to operate on this two party system in this democracy that was bifurcated from the beginning and now I think you see younger people and not just younger people really looking at how we shift this system. How do we get rid of some of this partisanship in regards to our courts are no longer independent, how our legislative lines are drawn even down to the filibuster," Bass explained.

RELATED: Uptick in young voters could have major implications in North Carolina

Greene said younger voters have a tendency to register as unaffiliated and choose a party later on. He also explains unaffiliated voters have an advantage in North Carolina because they can choose which primary election to participate in.

When it comes to gaining insight into which way North Carolina might swing, the increase in unaffiliated voters in the state makes it even hard to predict election outcomes based on voters' registration.

"There is a lot of people who register as an independent but have a clear preference for Democrats or Republicans and we don't know based on their party registration. What we do know is based on looking at all the polls that it would be very surprising at this point if it is not close in the state," Greene said.
Report a correction or typo
Related topics:
politicsncdonald trumpvote 2020nc2020joe biden2020 presidential electioni teampresident donald trumpvice president joe biden
Copyright © 2021 WTVD-TV. All Rights Reserved.
VOTE 2020
103-year-old Black woman recalls not being able to vote
Doug Emhoff becomes 1st second gentleman
1st Black, Asian woman elected VP: Watch Kamala Harris' journey
How to pronounce Kamala Harris' name and what it means
TOP STORIES
Tropical Depression Claudette to bring heavy rain to NC
Man linked to 22 car thefts arrested in Fayetteville
NC State baseball tops Stanford 10-4 in CWS opener
Raleigh HS basketball player killed at graduation party: Police
1 dead in Falls Lake drowning, sheriff's office says
Buyers lining up to check out 'house from hell' listed for nearly $600K
NC celebrates Juneteenth for first time since federal recognition
Show More
Meet the most important Civil War leader you've never heard of
Wife of man killed by Honolulu police: 'If it was me, I'd still be alive'
Man dies after shots fired into Smithfield home: Police
Judge sides with Florida in cruise lawsuit, says CDC overstepped authority
Durham mayor responds to violent night in Bull City
More TOP STORIES News