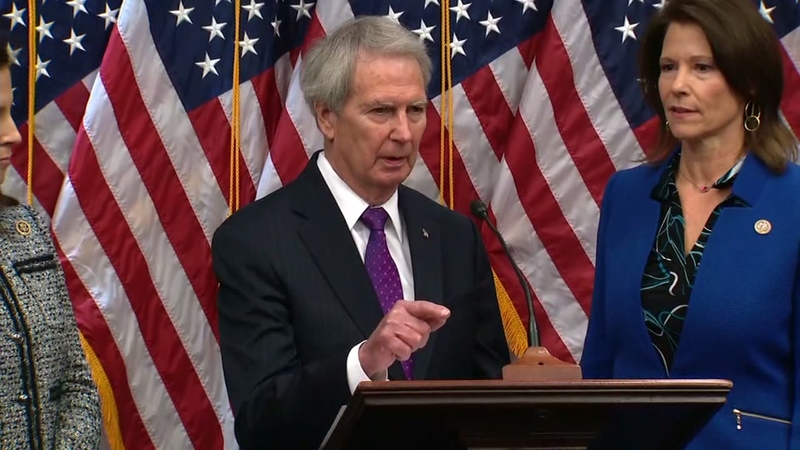 A statement from Jones' office said he passed away Sunday afternoon in Greenville.

"Congressman Jones was a man of the people. With a kind heart and the courage of his convictions, he dedicated his life to serving his Savior and to standing up for Americans who needed a voice. He was a champion for our men and women in uniform and their families, always mindful of their service and sacrifice," a statement from Jones' office said.

Deeply saddened by the passing of Walter Jones—a beloved colleague and friend who had a profound impact on all through his graciousness, character, and committed Christian faith. God be with and keep his family. We will miss him.

Jones, a Republican, served in office since 1995. He was the son of Walter B. Jones, Sr., a Democrat who served in Congress representing North Carolina's 1st District from 1966-1992.

Jones ran for his father's seat as a Democrat after he announced his retirement in 1992; he was defeated and switched parties prior to the 1994 election.

Jones served on the Committee on Armed Services and was a member of various caucuses.

This now leaves two North Carolina congressional districts without a congressman. Along with voters in the 9th district, about 1.4 million North Carolina residents are without House representation in Washington D.C.

The governor does not appoint a successor, but statute may require the governor to set the date of the special election.

The NC09 evidentiary hearing is set for Feb. 18, so it's possible North Carolina can have two separate special elections under very different circumstances. One, to fill the seat of Congressman Jones who has died, and the other to fill a vacancy mired in controversy.

Per N.C. statute, @RepWalterJones now-vacant seat will require special election with primaries. If @NCSBE also orders election for #NC09, there will be no need to wait for 2020 for NC to be front & center on national political map. @ABC11_WTVD @ABC @GStephanopoulos #ncpol

There are tangible consequences to not having a congressman.

Sen. Tillis' office says staffers are working 100 cases for NC09 voter issues like help with Medicare and VA benefits. The office has also responded to some 6,000 emails. Now add another district without a congressman and that could mean longer waits for resolutions or answers from Senator Tillis or Burr's staff.