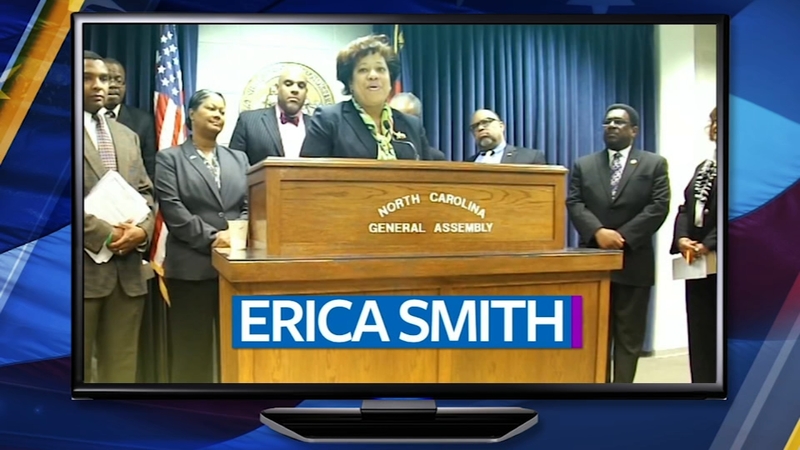 RALEIGH, N.C. (WTVD) -- A Controversy is swirling around a political TV ad that supports Erica Smith in her campaign to represent North Carolina in the U.S. Senate.

The ad is running on ABC11 and other stations across North Carolina.

Smith is a state senator running against Cal Cunningham in the March 3 Democratic primary.

She's running for U.S. Senate, but Erica Smith is upset about the TV ads encouraging you to vote for her.
Details about the swirling controversy - live at 11. pic.twitter.com/BphiFFZFnH

The ad is not produced by the Smith campaign.

She says a Political Action Committee backed by Republicans, called Faith and Power, is spending $1.2 million on the ads.

"The Erica for U.S. campaign disavows and disassociates ourselves from the interference of Republicans in the Democratic Senate Primary," Smith's campaign said in a statement. "This entity is not authorized to represent our views and positions."

Cunningham also weighed in saying: "Washington Republicans know Senator Tillis is weak, and apparently they don't like his chances against me in November. Now they're resorting to shady tactics to meddle in our election -- and it's disrespectful to North Carolina voters."

The Tillis campaign tells ABC11 it did not know about the PAC until this week.

"The outrage from North Carolina Democrats over a positive ad buy for one of their candidates is curious considering they didn't seem to have a problem with Harry Reid spending millions on attack ads against Senator Tillis during his 2014 primary," said Andrew Romeo, Communications Director for the Tillis campaign in a statement to ABC11. "The Tillis campaign only heard of this outside group as of this week when their buy became public, and couldn't be the least bit concerned with which radical liberal emerges from the chaos that is the Democratic primary."
Report a correction or typo
Related topics:
politicsraleighstate politicsnc2020politicsnorth carolina news
Copyright © 2022 WTVD-TV. All Rights Reserved.
TOP STORIES
NC residents, organizations divided on Roe v. Wade ruling impact
Where abortion rights stand in NC after Roe v Wade decision
With Roe dead, some fear rollback of LGBTQ+ and other rights
Monkeypox: What is it? Health experts answer common questions
Brian Laundrie confession letter released: 'I ended her life'
Supreme Court overturns Roe in landmark case on abortion rights
False claims about abortion after Roe v. Wade case
Show More
Biden vows to 'do all in my power' to protect abortion access
NC politicians react to Supreme Court overturning Roe v Wade
Congress sends landmark gun violence compromise to Biden
How personal data could be used to enforce anti-abortion laws
How outlawing abortion could worsen maternal mortality crisis
More TOP STORIES News