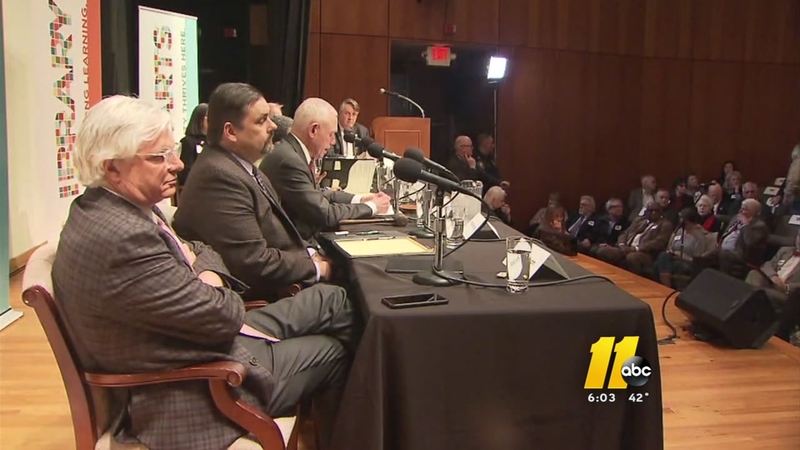 RALEIGH, NC (WTVD) -- A special committee met Wednesday for the first and only time in front of the general public ahead of its upcoming decision on whether or not to relocate three Confederate monuments from North Carolina's State Capitol.

The five-member Study Committee on Relocation of Monuments is hoping to recommend action by April.

"I truly believe we owe each other the dignity and decorum of the process," committee chair David Ruffin told the crowd of about 100.

The Study Committee's charge follows a petition from Gov. Roy Cooper and the N.C. Department of Administration to relocate the three Confederate monuments from the State Capitol grounds in Raleigh to the Bentonville Battlefield State Historic Site in Four Oaks.

The 11-member North Carolina Historical Commission voted to appoint a committee from commission members to study the issue and seek advice and legal opinions from appropriate entities. All commissioners serve six-year terms and are nominated by the governor (four current members were nominated by Cooper, seven by former Gov. Pat McCrory).

Empowered by 2015 @NCLeg law, @ncculture to decide fate of three #Confederate monuments because they are on state grounds. Chair opens meeting “We owe each other decorum and the dignity of the process.” @ABC11_WTVD pic.twitter.com/ZJwnXOlO1R

Wednesday's hearing drew comments from dozens of North Carolina residents representing cities and towns from across the state.

"Our ancestors fought and died for state's rights," Shannon Rights, of Winston-Salem, asserted to the committee. "These memorials are in remembrance of their sacrifice and serve as gravestones for those who did not return home to North Carolina."

"When we were still a young state, we expressed the belief that government was of, by and for the people - and yet some of us were denied the basic definitions of humanity," Raleigh resident Charles Lane countered.

While certainly a politically charged debate, emotions have cooled somewhat since a tumultuous summer in North Carolina and its neighboring states.

On August 14, dozens of Durham protesters ripped down a Confederate monument in front of the Durham County Courthouse after a white-supremacist march in Charlottesville, Virginia.

Of the 111 #Confederate monuments & memorials in North Carolina, 98 of them were dedicated after 1900, including three after 2000. @ABC11_WTVD @ncculture @NCHistorical pic.twitter.com/3B98ab0Lvi

The third statue outside the Capitol, a memorial to Henry Lawson Wyatt, was dedicated in 1912. A native of Edgecombe County, Wyatt is purported to be the first Confederate Soldier killed in action.
Report a correction or typo
Related topics:
politicsraleighwake countyconfederate monumentconfederacyraleigh news
Copyright © 2021 WTVD-TV. All Rights Reserved.
More Videos
From CNN Newsource affiliates
TOP STORIES