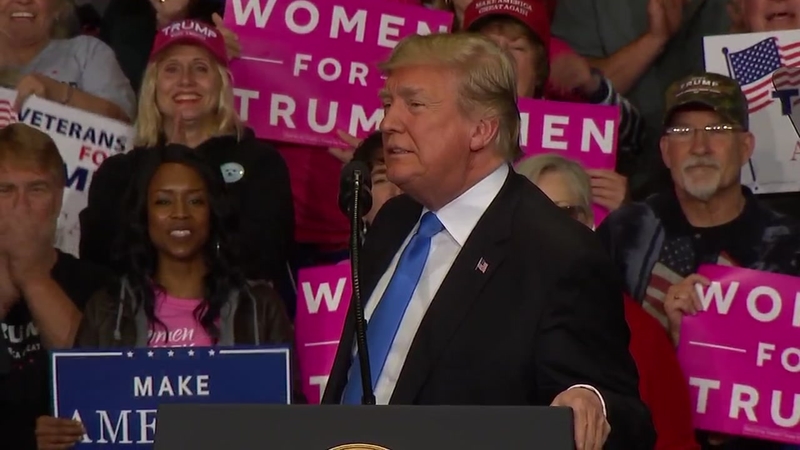 "Get them to Washington fast!" Trump told the crowd Friday.

Budd, who is running against Democrat Kathy Manning, said the "status quo in Washington" is trying to stop Trump at every turn. He said he will help Trump "drain the swamp" in the nation's capital.

"Mister President we have your back here in North Carolina," Budd said.

Starting to fill in here at @BojanglesCol in #charlotte. We’re waiting on arrival of @POTUS shortly. Set to take stage at 7 tonight #ABC11 pic.twitter.com/34aEgb47uY

Trump appeared Friday night at Bojangles Coliseum in Charlotte as part of his midterm campaign tour to promote Republicans in congressional races.

He pulled no punches at the rally, At one point he referred to his defeated 2016 opponent as "Crooked Hillary Clinton," prompting a round of "Lock her up!" chants.

Trump said the media has tried to attack the conservative movement, which he says is trying to bring power back to the American people.

Beth Stone, another Trump supporter, told ABC11 that the president is "doing it for us. He doesn't have to. He could play golf every day."

The crowd broke into boos when he denounced negative media coverage and there were loud chants of "CNN sucks." Trump said the media has a role to play in making the tone of political discourse less divisive.

The president said everyone would benefit if the "politics of personal destruction" ends.

"It seems like everyone is all hunkered down in their own positions and not really being more open-minded," said Will DeJesus, of Charlotte. "I'm obviously a Republican but there are always two sides to every story, and you can't begin to solve issues if you don't have dialogue. I think that's where our country is right now."

Take a look at the line wrapping around the @BojanglesCol. They’re here hours before @POTUS arrives in #charlotte #PresidentTrump #ABC11 #CharlotteNC pic.twitter.com/PBfNfgQwd7

"No, it doesn't bother me that it's a show, because I know businesses are still being taken care of," Hursey said. "Trump is a businessman before anything else, and it's obvious. It's good for the people, it's good for the area."

Harris, who unseated incumbent Robert Pittenger in the Republican primary, faces Democrat Dan McCready in November in the race to represent a district stretching from the Charlotte area toward Fayetteville.

Some of the sites and sounds of this #MakeAmericaGreatAgain rally were covering tonight in #Charlotte. See you on TV on #abc11 at 4,5 and 6 pic.twitter.com/YwMtTxNX4N

"Tonight, enthusiasm for President Trump and North Carolina Republican candidates was on full display," said Regional RNC spokesperson Ellie Hockenbury. "As we inch closer to Election Day, the passion that voters show for President Trump and his agenda in the Tar Heel State sends a clear signal to Democrats that we are energized, eager, and ready to defy history this November.

After the Charlotte rally, the president will make a similar stop Saturday in Illinois.

"I'm very excited for my father-in-law to visit my home state once again to celebrate the great American comeback that's benefitting families across North Carolina," said Lara Trump, who serves as a senior adviser to the president. "As the future site of the 2020 Republican National Convention, Charlotte is a great place for President Trump to go and urge North Carolinians to get out and vote on November 6th to help protect and expand the Republican majorities in the House and Senate."
Report a correction or typo
Related topics:
politicscharlottencrepublicanselection 2018president donald trumprallynorth carolina news
Copyright © 2022 ABC11-WTVD-TV/DT. All Rights Reserved - The Associated Press contributed to this report.
TOP STORIES
LIVE : Snow projections increase slightly as storm nears
Roads mostly clear midday Friday, but snow begins to fall
LATEST: Deadline extended for House Wake COVID relief program
City, county governments close services as wintry weather hits NC
Ford recalls 200K cars because brake lights can stay on
Laundrie claimed responsibility for Petito's death in notebook: FBI
US confirmed 1st COVID case 2 years ago today
Show More
Louie Anderson, Emmy-winning comedian, dies at 68
How to drive on snow, ice and get out of a skid
Raeford man killed in Fayetteville motorcyclist crash
Many COVID-19 vaccine side effects caused by placebo effect: Study
'So much deceit': Brother of Lori Vallow speaks out on family divide
More TOP STORIES News