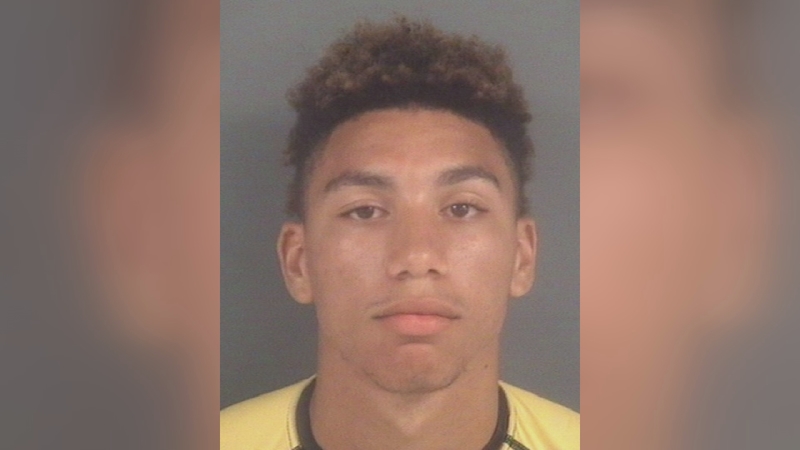 FAYETTEVILLE (WTVD) -- A high school quarterback is on the bench and under investigation for allegedly sending sexually explicit photos to his girlfriend.

The charges stem from an incident last October and the couple was charged in February, but Jack Britt High School officials said they were unaware of the charges until a couple of weeks ago.

Investigators said the sexting happened while Copening was a student at Douglas Byrd High School last year. Officers took his phone while investigating another incident.

"We seized his phone and while our investigators went through the phone they saw there were photos of himself and another person on the phone," said Sgt. Sean Swain with the Cumberland County Sheriff's Office.

Swain explained that in North Carolina it is illegal for anyone under 18 to send or receive sexually explicit photos with a cell phone.

"Simple possession having it on your cell phone is a charge itself, and if you should send it out to another person that is another charge," he said.

Copening transferred to Jack Britt High School this school year and was starting quarterback for the Buccaneers August 21 game. But according to reports he's been benched while school officials investigate the allegations. There's no word as to when he might be allowed to rejoin his teammates.

In a statement Leon Mack, director of student activities for the Cumberland County Schools, said that "both Douglas Byrd and Jack Britt high schools did not violate eligibility requirements, and that neither school was made aware of the felony charges against the student."

Copening has a court appearance on sexual exploitation charges next month. If convicted, the teen would have to register as a sex offender for the rest of his life.
Related topics:
fayettevillesportssexting
Copyright © 2022 WTVD-TV. All Rights Reserved.
TOP STORIES
2 to 3 inches of snow possible in Triangle
Voting bill collapses, Democrats unable to change filibuster
'We can't get any more': Stores struggle to restock shelves
Third arrest made in Black Friday shooting at Streets at Southpoint
Daniel Turcios shot 5 times after crash on I-440, RPD reports
NC legislature votes to further delay primaries until June 7
'He was special': Durham friends remember Andre Leon Talley
Show More
Cumberland County mom spins way to $500,000 lottery prize
Victim in fatal I-85 crash was just 3 months old
19-year-old military driver charged in wreck that left 2 Marines dead
Earnhardt Jr. to be inducted into NASCAR Hall of Fame
Raleigh man feels lucky to be alive after bullet found above his bed
More TOP STORIES News