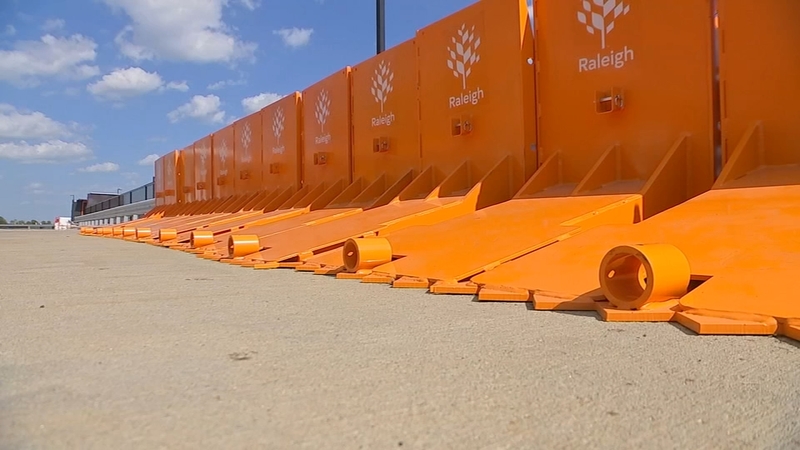 RALEIGH, N.C. (WTVD) -- As festival season ramps up, the City of Raleigh is beefing up security on downtown streets.

Thousands of Raleighites and visitors to the Wide Open Bluegrass Festival this weekend will notice the orange, steel barricades blocking Fayetteville Street and side streets. They were first used earlier this month during SPARKcon and La Fiesta del Pueblo, last weekend.

Standing about three feet tall and weighing 800 pounds each, the barricades, meant to tip and lift a car in the air when a driver hits one, are replacing the city's dump trucks that have been used to block streets and protect crowds.

"The feedback has always been great," said Derrick Remer, Emergency Management and Special Events Director. "People want to feel protected. They didn't mind the dump trucks because they knew they were serving a purpose to prevent anything bad from happening."

The dump trucks, first used in response to truck attacks on large crowds, namely the 2016 terror attack in Nice where dozens were killed and hundreds more were wounded, were always meant to be a temporary solution.

Remer said the steel barricades, which are made by Meridian Rapid Defense Group, cost about $7,000 each, and are a better use of the city's resources.

.@RaleighGov new steel barricades, about 800 lbs each, meant to tip and lift a car in the air when it hits one. They’re replacing city dump trucks that have been used to block streets and protect crowds during festivals. Look for them @IntlBluegrass this weekend. @ABC11_WTVD pic.twitter.com/zGXPK2zmwq

"The cost benefits are great," Remer said. "We don't have staff sitting in those dump trucks all day long. Staff can go out, deploy them, and then go back."

Remer said there are enough barricades to cover the entire Fayetteville Street corridor and multiple events if need be.