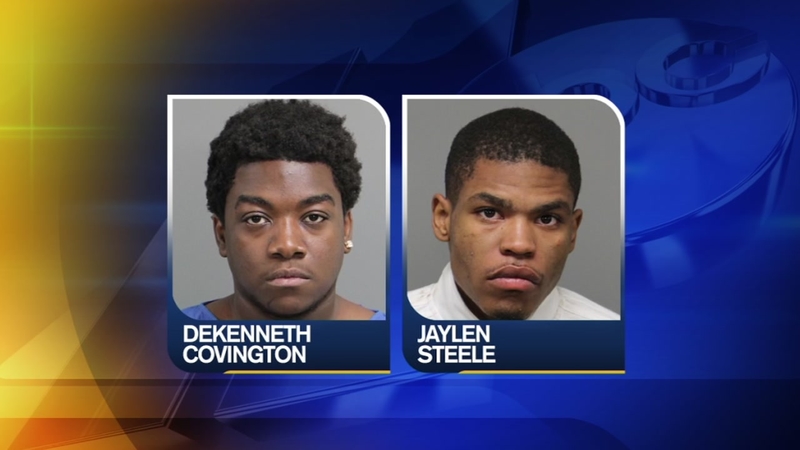 DURHAM, N.C. (WTVD) -- Two people have been arrested after a Raleigh home invasion turned into a police chase ending with a crash on the train tracks Monday morning in downtown Durham.

Authorities said two people with a shotgun and machete invaded a home on Farris Court in Raleigh's Longview area and stole an SUV, a TV, cell phone and cash.

About 2:40 a.m., Durham police spotted the stolen vehicle and began to pursue it.

The pursuit ended at 2:50 a.m. when the car crashed on the train tracks near Main Street at Great Jones Street in Durham.

#BREAKING @DurhamPoliceNC at the scene of wreck linked to chase of home invasion suspects fleeing from Raleigh. Two in custody, facing multiple charges in both cities. @ABC11_WTVD live reports on this, ahead on air and online. pic.twitter.com/4lNpPXX61g

Witnesses said the two suspects got out of the car and ran but were both arrested after two separate foot chases.

The two were identified as Jaylen Steele, 18, and DeKenneth Covington, 20.

In Durham, the Steele and Covington will face traffic charges including felony fleeing to elude officers, possession of a stolen vehicle, and resisting police. But first, they will appear before a Wake County judge on other charges Tuesday.

No officers or other people were injured.

Debris from the obliterated Durham History Hub sign’s spread across the scene where home invasion suspects wanted by @raleighpolice crashed a stolen SUV after a chase by @DurhamPoliceNC . Two supects who jumped and ran are in custody now. #abc11 pic.twitter.com/hiABBRtSbt

A neighbor, who didn't want to be identified, told ABC11 she was shocked to find out a gun had been used during the crime.

"Oh, my God. I didn't know that," she said. "I'm going to have to make sure my doors are completely locked. Yeah, because my son comes in from school, you know. Oh, that is very scary. It really is."