Vigil a call for justice for slain Raleigh cabbie 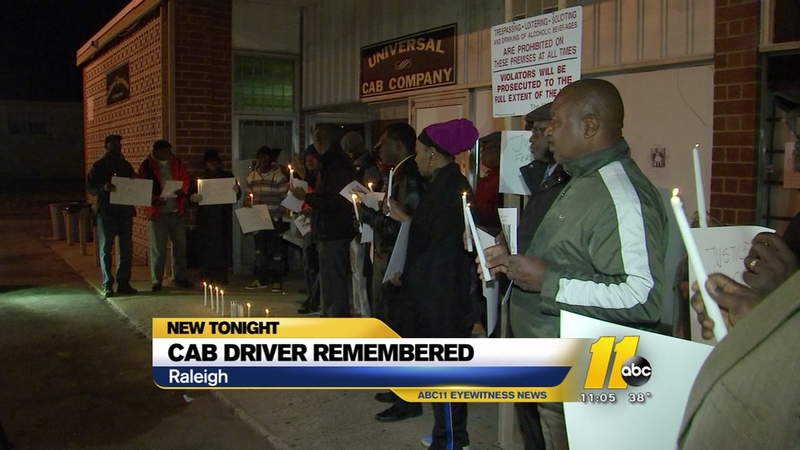 RALEIGH (WTVD) -- Friends and family of a Raleigh cabbie gunned down on Nov. 8 held a vigil to bring renewed attention to the still unsolved case.

The vigil started at 6 p.m. at Universal Cab Company on Hill Street across from St. Augustine's University. Before the vigil, police handed out fliers.

The family and friends of 56-year old Cyril Efobi are trying to raise the money to send his body back to his native Nigeria and plans to hold a memorial service in Raleigh next month, but they say most important on their list is solving his murder.

Police handed these out before vigil urging anyone with info to come forward https://t.co/EpPU5z9BNT #ABC11 pic.twitter.com/6dbKbIFbDE

"We really want people to help us work with the law enforcement agents and get the person that did this crime," John Eluwa told ABC11.

Eluwa, a Raleigh defense lawyer, knew Efobi for more than 30 years since they were both students at Raleigh's Shaw University.

"He's very sociable with people. He's very upfront. He's very likable. He also may not have children but a lot of young people that love him," Eluwa said about his friend. "Anybody that comes in contact with him, you know, wants to be around him."

When it was pointed out that he was talking about Efobi in the present tense, he paused and said, "Nobody believes that he is gone. Except for when maybe his body has been interred maybe we begin to think so. But right now, anybody you're talking to think or feel that he's still around."

"Help us find who snuffed out the life of Efobi" https://t.co/EpPU5yS0pj #ABC11 pic.twitter.com/8BqjKXEi4Y

A surveillance camera outside the Universal Cab Office captured the murder.

But now police say the suspect in the picture isn't wearing all white as it appears. They say the camera's night vision actually shows dark colored clothing as light.

Surveillance photos from the shooting

They say the suspect was wearing a dark hoodie and glasses and a baseball cap with a Chicago Bulls logo or a similar logo.

They now say the suspect is a mid-sized, light-complexioned black man with facial hair.

"I call him a gentle giant"- loved ones say of their friend Efobi #ABC11 pic.twitter.com/Av43Fp0ySu

Although the pictures of the suspect are grainy the victim's friends think someone familiar with the guy could recognize him.

"He was a very warm person, very friendly, always smiling. And has a very good background," Eluwa said. "(It's) why we want to get the word out for anybody that knows anything about what happened, (they) should please talk to law enforcement because this is an innocent victim."