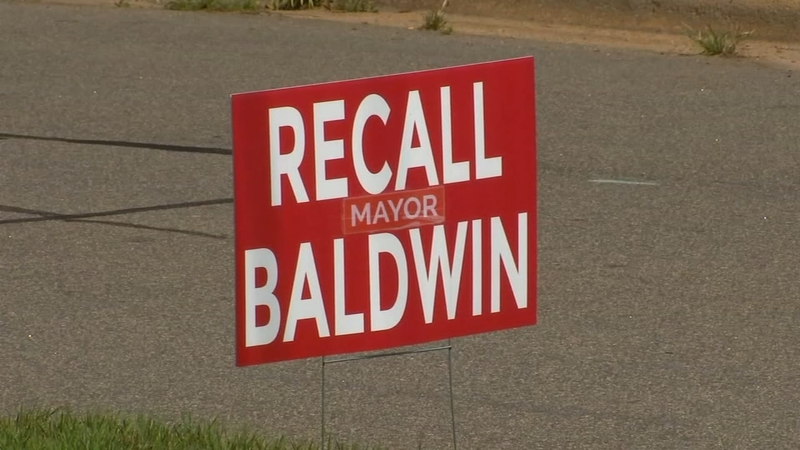 RALEIGH, N.C. (WTVD) -- Red signs are popping up on Raleigh front yards saying, "Recall Baldwin," flyers are circulating in neighborhoods, and people have been signing a petition. It's all part of an effort to oust Mayor Mary-Ann Baldwin from office.

The grassroots organization Livable Raleigh is taking on a bold fight.

Livable Raleigh says Baldwin has acted unethically and is engaging in a power grab.

Many are upset that the upcoming elections are being moved eight months down the calendar.

"The public has been pushed further and further away since she has become the leader of this city," Maruyama said.

Raleigh is not the only city making an election change. More than 30 North Carolina municipalities have postponed their elections so maps can be redrawn based on new population numbers from the 2020 Census.

Legislation passed in the General Assembly paved the way for the new maps.

Some municipalities, such as Cary, are moving the elections to March..

In Raleigh, Baldwin pushed the elections, which include the mayoral race, out much further -- to November 2022.

Livable Raleigh said Baldwin is being underhanded and officially launched its recall effort this month.

"It's a difficult task. It's an uphill climb. I think we knew that going into it, but we are optimistic of the power of the people," said Maruyama. "Something that is not being monitored very closely is how angry people are in the decisions that have been made in the city."

Baldwin said she worked with the city council and legislature on the change.

"The initial discussion to move City elections into 2022 was at the direction of the City Attorney based on the delay in the 2020 census data that is required to redraw the city council districts every 10 years," Baldwin said in a statement to ABC11. "After further discussion, the decision was made by the City Council AND the State Legislature to move the elections permanently to November. This will allow for greater voter participation due to a larger turnout in even-numbered election years versus odd-numbered election years. I'm not sure why anyone would be upset about having increased voter participation in our elections.

"I am focusing on moving Raleigh forward during an ever-threatening pandemic and the resulting economic and social upheaval that it has caused. It is unfortunate that a group led by several former city councilors who were decisively defeated in the last election continue to try to foment dissension and division," Baldwin added. "We need to work together to focus on the major issues facing our community -- housing affordability, commuter rail, public safety and support for our small businesses. That's what this Council is committed to achieving."

Maruyama argued that the campaign is of Baldwin's own doing.

"Had we moved our elections to March 2022, we wouldn't be having a recall," she said.

There will be an information session at the McKimmon Center on Thursday at 7 p.m.