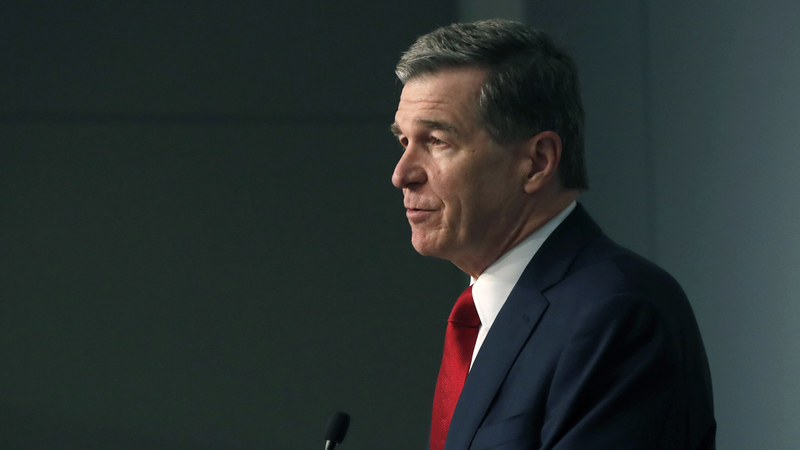 The plan introduced by Republican state lawmakers could still become law if enough of the handful of Democrats who supported the bill decide to help override the governor's veto.

"Students learn best in the classroom, and I have strongly urged all schools to open safely to in-person instruction and the vast majority of local school systems have done just that," Cooper said. "However, Senate Bill 37 falls short in two critical areas. First, it allows students in middle and high school to go back into the classroom in violation of NC Department of Health and Human Services and CDC health guidelines. Second, it hinders local and state officials from protecting students and teachers during an emergency."

The Democratic governor said he told the Legislature that he would sign the bill if these "two problems" are fixed. He has called on school boards that haven't yet done so to transition to in-person instruction but opposed the statewide mandate that would've required them to reopen with about two weeks' notice. In some places, students have been kept out of physical classrooms for 11 months, prompting an outcry among parents concerned about learning loss.

Cooper contended that the bill threatens public health just as North Carolina strives to emerge from the pandemic.

"The bill they just passed fails on both of these fronts," Cooper said. "I'll continue to discuss potential new legislation with General Assembly leaders before taking action on the bill that I now have on my desk. It is critical for our teachers and students that we get this right."

"At the same time the Governor boasts of teacher vaccinations after giving them a higher priority than cancer patients, he vetoes this school reopening bill because it offers school districts the flexibility to operate under the plan that best suits their on-the-ground needs," said Sen. Deanna Ballard, R-Watauga, who co-chairs the Senate Education Committee and sponsored Senate Bill 37.

"With teacher vaccinations in full swing, there is no legitimate excuse for Gov. Cooper and the far-left NCAE to oppose the broad reopening flexibility this bill grants to school districts," Ballard added. "The far-left NCAE owns the Governor's mansion. Thankfully, Senate Bill 37 passed with enough bipartisan support to override Gov. Cooper's veto, and we expect to bring it up for an override vote."

"With this veto, the Governor ignored desperate parents, policy experts, and students who are suffering from his refusal to let them return to the classroom," Moore said. "The legislature has worked hard to find common ground with the Governor, but we have a constitutional duty to provide education access to our students and will pursue a veto override on behalf of North Carolina families."

The NCAE had pushed for the higher priority on the COVID-19 vaccine distribution list, though the Centers for Disease Control and Prevention does not believe school reopening should be predicated on teachers being vaccinated.

"North Carolina public school educators are eager to get back into their classrooms as soon as it is safe to do so, but SB 37 is the opposite of a safe return to in-person instruction," said NCAE President Tamika Walker Kelly. "By attempting to pre-empt the decision-making authority of local school boards and ignoring the latest scientific guidance, this bill would have needlessly endangered the health and safety of educators and students. The best action all legislators can take right now is to encourage their communities to comply with the safety protocols and to encourage the vaccination of all school employees. We thank Governor Cooper for vetoing this bill, and we look forward to working with him and the Legislature in crafting a safe return to in-person instruction."

Republicans have accused Cooper of playing more to politics than science in the fight to reopen schools, citing studies done here in the Triangle where a team of researchers at Duke and UNC found a very low rate of in-school transmission.

"Governor Cooper vetoed SB 37 to keep as many kids as possible locked in failing virtual schools at the same time he's actively settling with left-wing activists to let thousands of convicted criminals out of prison," said NCGOP Communications Director Tim Wigginton. "Cooper is letting criminals out of jail and locking our kids in failing virtual schools."

Cooper noted that 95% of districts plan to provide in-person instruction by mid-March, which represents about 96% of the state's roughly 1.5 million K-12 public school students.

At least 3,500 incarcerated people will be granted early release from North Carolina state prisons, according to the NC NAACP and ACLU, after a settlement was reached in NC NAACP v. Cooper, a lawsuit brought by civil rights organizations, three individual incarcerated people, and a spouse of an incarcerated person, challenging the conditions of confinement in North Carolina's state prisons during the COVID-19 pandemic. Under the terms of the settlement agreement, the state has 180 days to release 3,500 people currently in its custody.