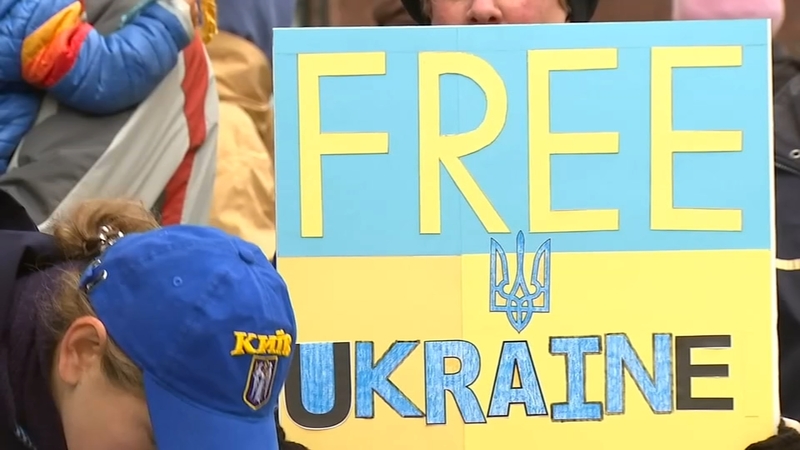 RALEIGH, N.C. (WTVD) -- Saturday, US and NATO allies announced a new round of sanctions targeting Russia's financial system, including removing some Russian banks from SWIFT, a vital international banking messaging service. It's the latest measures aimed at deterring Russia's attack in Ukraine, which has sparked international condemnation.

In response, rallies across the globe in support of Ukraine have taken place since fighting began earlier this week, including in downtown Raleigh.

"This is very terrible. And a lot of people are dying over there. The soldiers, the young guys, civilians, kids. It's terrible," said Vasyl Shymonyak, who is from Ukraine.

"First of all I was shocked and now I'm getting angry, and I'm concerned. There's a lot of life being lost uselessly," added Paul Wasylkevych, whose family is from the country.

Shymonyak said he has been in constant communication with his family, who are in different regions of the country.

"My one part of the family lives in Western Ukraine, which is not so bad. But my brother lives in the south, Odessa, where they started to bomb today. So they do go down to the shelter," Shymonyak said.

A sense of shock has been a constant theme among many in the tight-knit local Ukrainian community, even though relations between Ukraine and Russia have been strained following the annexation of Crimea in 2014.

"Ukraine now has a solid eight years of fighting experience, hundreds of thousands of combat veterans, many of whom have fought in the Donbass. The military was in really bad condition in 2014, it wasn't prepared, but it now has one of the largest, and most formidable fighting forces in the world," said Dr. Trevor Erlacher, a UNC graduate school alum and historian who lived and studied in Ukraine.

"I'm outraged and heartbroken over what is happening," Erlacher said.

Another change from 2014: the international reaction. Backlash against Russia's action is growing, even among leaders and countries who previously had warm relations with the Kremlin.

"This act of Russian aggression is just so shocking and morally indefensible that the West and much of the world is united in opposing Moscow in a way that I've never seen before," Erlacher said.

Erlacher also discussed Kremlin propaganda attempts to justify these actions, including claims that they are "denazifying" Ukraine and that the country is engaging in genocide against ethnic Russians. Ukraine's president, the democratically-elected Volodymyr Zelenskyy, is Jewish, and lost family members in the Holocaust.

"It's an absurd and baseless claim that's being used now to justify violence against Ukraine," Erlacher explained.

While Ukraine has been successful in slowing Russian advances thus far, fighting ramped up Saturday evening near the capital of Kyiv.

"I took (time off) this week; I couldn't do anything. For the last two weeks, I've been sitting in front of the computer. That's the only thing I do. Just watching the news," Shymonyak said.

A number of teams and events have also taken steps to distance themselves from Russia, with Poland's national soccer team refusing to play Russia in a 2022 World Cup playoff game, and Sweden adding they would not play them in a possible playoff game. Friday, Formula 1 cancelled the Russian Grand Prix, set to take place in September.

Saturday, New Hampshire Governor Chris Sununu signed an Executive Order "instructing New Hampshire Liquor & Wine outlets to begin removing Russian-made and Russian-branded spirits" until further notice. Ohio Governor Mike DeWine issued a similar declaration, Tweeting that he ordered the state's Department of Commerce to "cease both the purchase and sale of all vodka made by Russian standard, the only overseas, Russian-owned distillery with vodka sold in Ohio."