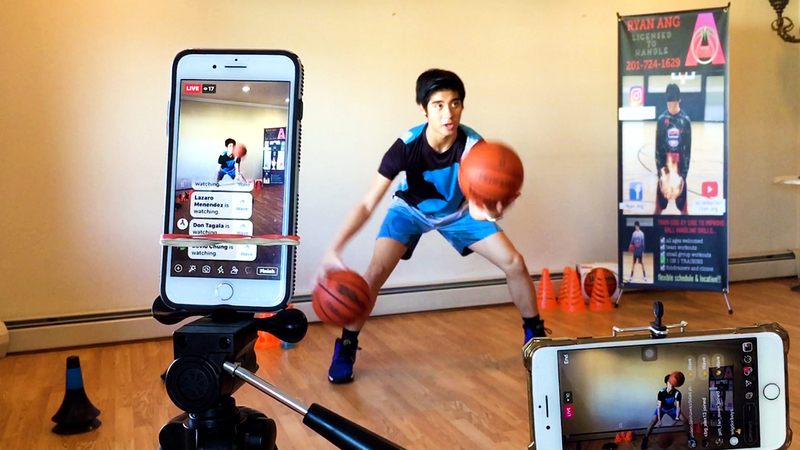 HACKENSACK, New Jersey -- Ryan Ang, a junior at Hackensack High school and point guard for his basketball team is also a savvy businessman. For over a year he's used his skill set for a profitable side job - teaching others to be better at the game.

"My clientele ranges from kids as young as seven to adults in their 50s," said Ang.

A few years ago, Ang became obsessed with dribbling drills on YouTube. He'd set up cones and practice anywhere, even working on his handles outside the grocery store while his mom went shopping.

Now, a junior guard for the Hackensack Comets, Ang was running drills in a gym and caught the eye of an AAU coach who recommended he become a trainer. Turns out, he' s a slam dunk instructor.

"Athletes loved my training as well as the parents. So that's how my business took off," said Ang.

At first, he did not charge for his lessons, but as he gained more clients, he started charging $25 per hour-long session. Then in mid-March, when New Jersey schools were forced to close due to the coronavirus outbreak, Ryan's clients still wanted to continue their instruction.

"I had to bring my training to a halt because I did not want to jeopardize my safety and their safety," said Ang. "I had to transfer over to online training sessions."

Ryan took his lessons to the internet but stopped charging and opened to anyone who wanted to enjoy some hoop action.

Though he's no longer making money, the live online training videos Ang posts on social media are resonating with his devotees.

"I've gotten positive feedback," said Ang of the parents who have given him feedback. "I like what you're doing. My kid's active instead of being on their phone and just sitting on the couch."

"I'd love to play for college. And when I'm in college, I'd also like to major in nursing. That's one of my plans," said Ang.

On the court or off, it's clear Ang is driven by a desire to help those around him.