Son speaks out about father's detainment by ICE 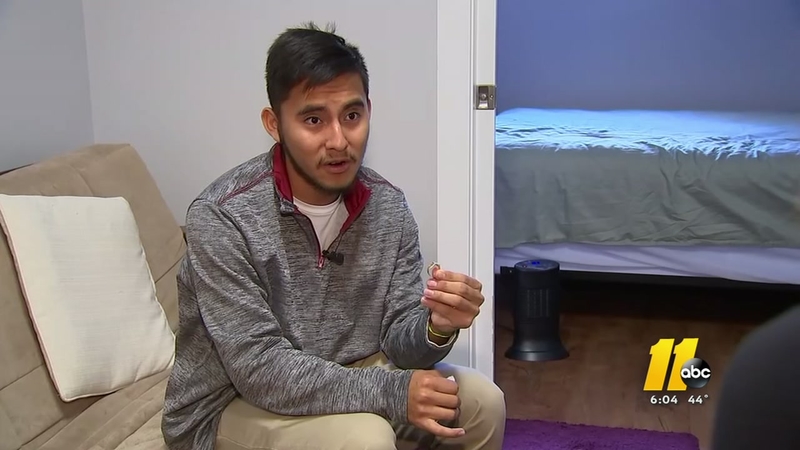 Son speaks out about father's detainment by ICE

DURHAM, N.C. (WTVD) -- Daniel Oliver-Perez, teared up as he looked at the space inside CityWell United Methodist Church in Durham that became his dad's home for almost the past year.

Oliver-Perez reflected on the time his father, an undocumented immigrant trying to remain in the United States, spent at the sanctuary.

"When I graduated, my dad gave me a symbolic ring when he graduated from high school, and we did it here at CityWell," Oliver-Perez said.

"Over there is where he slept," Oliver-Perez, 19, said, pointing to a bedroom.

Now, the space is empty.

His dad, Samuel Oliver-Bruno, is at Stewart Detention Center in Georgia after ICE detained him Friday.

During his time in the sanctuary, Oliver-Bruno, 47, who used to work in construction, kept busy with projects at the church, such creating a wall for a prayer room, fixing up a bathroom and he was working on a kitchen.

"My dad didn't have time to finish it when he got detained," Oliver-Perez said.

ICE said Oliver-Bruno has no legal basis to remain in the US and no outstanding appeals. ICE said he was arrested when trying to enter the country illegally in 2014 using fraudulent documents.

Oliver-Perez said his dad renewed his work permit annually until last year when it was denied. He said his dad went to the immigration office in Morrisville on Friday for an appointment as he petitioned for deferred deportation and then he was detained.

"My dad wanted to obey the laws and do the right thing," Oliver-Perez said. "That's all he was trying to do but after all, it was an entrapment."

Supporters showed up Friday and 27 were arrested for blocking an ICE vehicle.

Oliver-Perez was also arrested. He has been charged with assault on a government official. He wouldn't talk about that, citing the pending case, but witnesses said he was trying to keep ICE from taking his dad away.

Oliver-Bruno's supporters gathered at the ICE Field Office in Cary on Tuesday night for a vigil. More than 200 people attended, including Oliver-Perez.

"We're out here in support of my Dad and to show the world that we can't get this to happen again with another family," he said. "It's hurtful, but I'm still going to fight for my Dad, I'm not going to lay there and cry."

James Moore, a supporter, said, "It's important that between elections come together as a community to hopefully impede events like this."