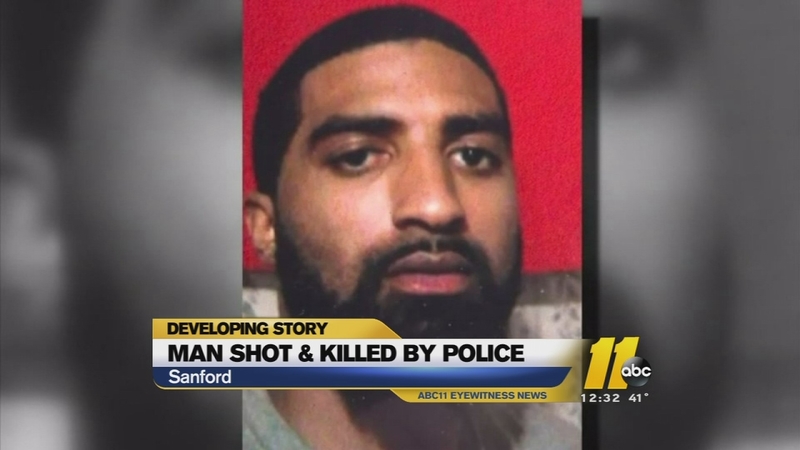 SANFORD, N.C. (WTVD) -- After spending all Wednesday afternoon, and much of the night in a Sanford neighborhood, police have cleared the scene on a fatal police-involved shooting.

However, they left plenty behind in unanswered questions about what exactly transpired at a home in the 600 block of Magnolia Street.

Nearly five hours passed before Sanford police issued a five-sentence statement about the shooting. They simply confirmed one of their officers shot and killed a man, and deferred all questions to the SBI.

It was family members who told ABC11 it was 23-year-old Travis Faison who was killed by police.

Emotions started to flare when Faison's mother, who rushed to the scene from Roanoke Rapids after getting word of the shooting, wasn't allowed to identify her son's body.

Family and friends gave ABC11 a look inside the house where the shooting occurred. They pointed out the bullet hole in back wall of the home, and loudly pointed out their suspicions of Sanford police.

"Man lying down in his own house, getting ready for work and they shot him. We want answers," said Faison's cousin Ty.

Later people inside the home burned Faison's couch in the yard.

"What I'm saying is one of our brothers in this community got killed and a mother should be able to identify her own son," said family friend William Johnson.

"I just want to find out what's going on," said Faison's mother, Jacqueline Faison. "That's why I drove almost three hours so I could see, make sure it's him."

Neighbors said they heard a single gunshot just after 1:40 p.m. at Faison's home. They said the Sanford officer was serving a warrant before the gunfire.

Police swarmed the area, but said nothing to clarify what happened. Was Faison armed or unarmed? Was there a struggle?

They are unanswered questions that aren't sitting well in the community where many were already distrustful of police.

"It's pretty much a black area and they just look down on this area because they think it's a drug-infested area," said Sedric Womack, Faison's cousin.

Seven hours after the shooting, Sanford police and the SBI cleared the crime scene, but offered little answers to the media, the community, or Faison's family about what happened. That includes his mother, who is still waiting to identify her son.

"One person say one thing. Another person say another thing," said Jacqueline. "Nobody can't tell me anything right now."

The SBI is leading the investigation, which is standard procedure.