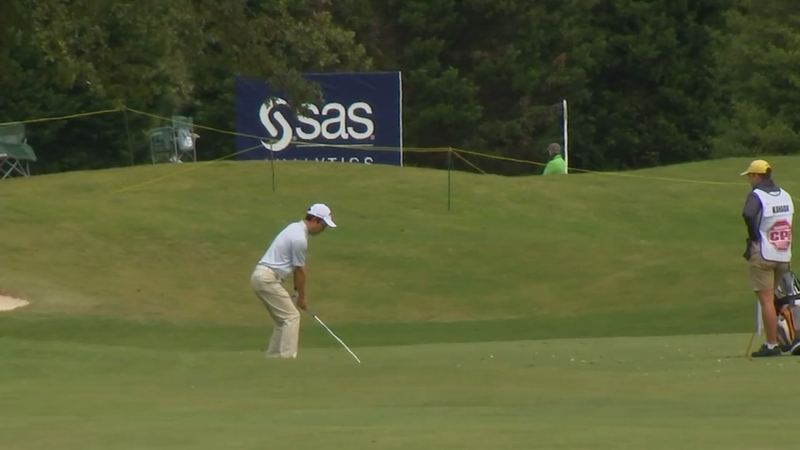 CARY, N.C. (WTVD) -- It's the 20th anniversary of the SAS Championship at Prestonwood in Cary, a notable milestone for one of the signature events on the Champions Tour. The party would be on but for the pandemic.

"I think the only thing that's normal is inside the ropes," Tournament Director Jeff Kleiber told ABC11. "Everything else is not normal. It's different, but we got here and are doing it healthy and safely."

Only a lucky few folks will be in the gallery in Cary this weekend -- Club members and tournament sponsors only. The Williams family got in thanks to having constructed some of the on-course bathrooms.

"It's very quiet. Not a lot of applause," Mike Williams said. "We saw one golfer tee off and clap for himself."

With so few fans, the access will be extraordinary. So will the need to be behaved because there's no blending into the crowd this time. Audra Williams took that into account.

I did turn my ringer off on my phone because I was worried about that," she said.

Kleiber said the preparation for a scaled-back event has involved a lot of collaboration. The golfers are thankful just to have a tournament in which to play, he said.

"A lot of the scenario-planning is learning from other events ahead of us," Kleiber said. "The tour was a great partner in just being able to say 'Hey, here's kind of how we think you should scale back.'"

While the Pro-Ams went off as planned the last couple days, all the normal social fun is out the window. Friday night would have been Food Truck Friday on the back patio, as an example. One thing that hasn't changed: Prestonwood's legendary culinary offerings. No buffet this year but the food is the food and the golf, of course, also remains top shelf.

"First time here at Prestonwood," Furyk said. "It's a nice golf course. The greens out here are tricky. I think if you can put the ball in play, you're going to have a fair number of short irons. But the greens are really tricky - you've got to put the ball in the correct spots."

Kleiber said the lucky fans that will have access are going to have an experience unlike anything they've enjoyed before.