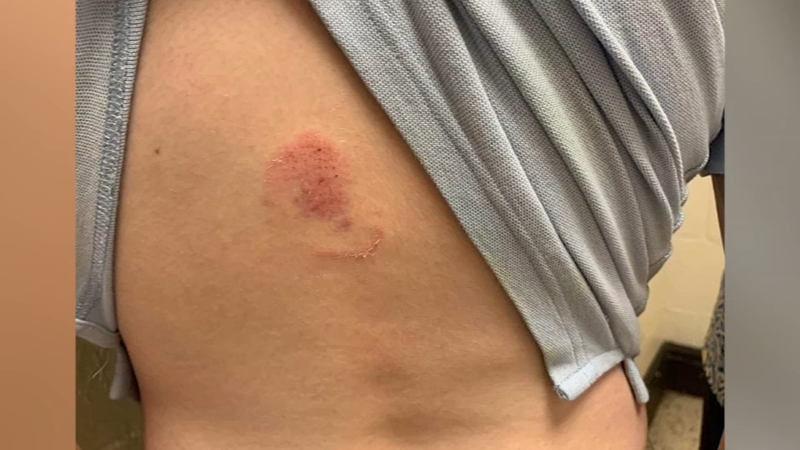 CLAYTON, N.C. (WTVD) -- A Clayton mother wants the Cumberland County School District to take action after she says her son, who is a special needs student, was bitten by a girl on a school bus Monday.

Rebecca Wood said she was notified by her son's group home in Fayetteville on Monday evening.

After getting in contact with the Student Resource Officer in charge of the investigation, Wood said she learned her son was bitten by another student with special needs.

Wood said all of the students with special needs are supposed to be restrained and supervised by an aid.

"She was walking up and down the aisle," Wood said.

A Clayton mother wants the Cumberland County school district to take action after her son, who is a special needs student, was bitten on a bus at Seventy-First High School. The full story at 5:30 p.m. on @ABC11_WTVD pic.twitter.com/Tr1re5wLb2

The SRO was investigating the incident as a simple assault case because of the bite injury sustained by 16-year-old Nolan Wood.

"It was actually so bad. He wears two shirts. It bled through his shirts at school," Wood said.

Nolan was taken to a Raleigh doctor to be evaluated; he was given antibiotics for the pain and also had a bruise on his hip.

Wood was able to retrieve an official report from the Cumberland County Sheriff's Office but learned the case was dismissed.

ABC11 reached out to the District Attorney's office for comment on the decision not to press charges.

The office said the juvenile case could have been taken in another route. However, they couldn't give any details because minors are involved.

"I was very angry but more than anything, I was devastated and felt horribly guilty," Wood said.

Wood added that several violations were made on the school district's end: from the slow reaction time of the aid to the lack of punishment given to the other student.

A statement from the school district said:

"As always, our top priority is to provide a safe learning environment for students and staff. When an allegation of inappropriate conduct is brought to our attention, we investigate thoroughly and respond in accordance with Board policy and applicable laws. Due to student privacy laws, we are unable to discuss the details of this situation."

School district officials were not able to tell ABC11 whether there would be any punishment or whether they would move Nolan and the student involved to separate buses.

Wood said it's unsettling to know her son will still be in the same bus as his alleged attacker.

"It's terrifying and it's not fair. I feel so bad for him," Wood said.