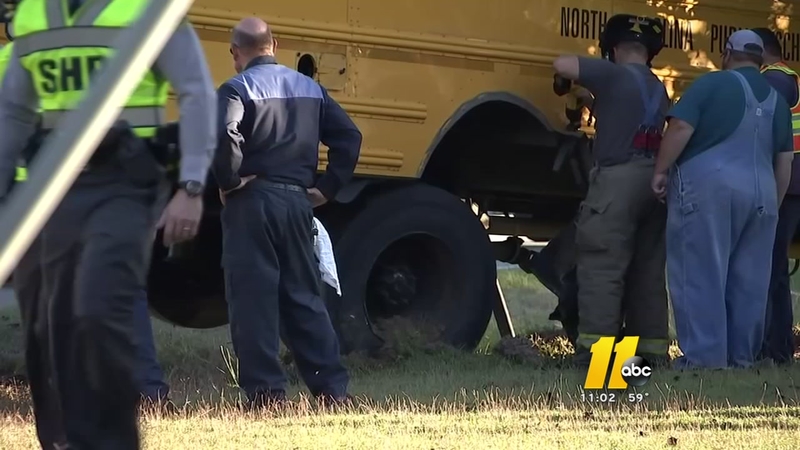 Frightening day for students aboard school bus in crash

BENSON, North Carolina (WTVD) -- Johnston County Public School Bus No. 177 was barely three minutes away from nearby Meadow School when the students on board saw and felt a dark-colored Ford Mustang come slamming into the back of their bus as they were on their way home.

The car was crushed under the bus's wheel well. The glass shattered in the bus' back door.

It happened Friday at the intersection of NC 96 and Godwin Lake Road southeast of Benson.

"I was scared ... like the whole floor was full of glass," said Meadow sixth-grader Joshua Sandoval.

There were 31 students on the school bus. 15 were injured, including seven who had to be transported to local hospitals. None of the children were seriously hurt.

Listen to the 911 call reporting the crash.

"I was panicking and everybody was crying and I was just trying to calm them down," said Kemora Nance, a student at Meadow.

Chris Baucon lives nearby and rushed over.

"It was chaos pretty much," he said. "The bus was over there; it had jumped the ditch and ended up with the whole back tire ripped out from under it."

The frightened young bus riders told ABC11 their driver stayed calm, taking care to ensure they got off the bus.

Not long after, nearby Fire Rescue and paramedics arrived at the crash site along Godwin Lake Road.

"What we do know is that none of the injuries are serious. We are pleased about that," said Johnston County Schools spokesperson Crystal Roberts. "We had firemen, EMS, many first responders on scene to help us very quickly to triage our students and our bus driver."

No update has been provided on their conditions.

While the cause of the crash is under investigation, Baucon told ABC11 this is the second car he has seen crash into the back of a school bus in four weeks at this intersection.

He's said he's ready to petition the Department of Transportation for a stop light.

"(Drivers) don't pay attention to the stop signs that are here, just drive right through. It's really bad," he said.