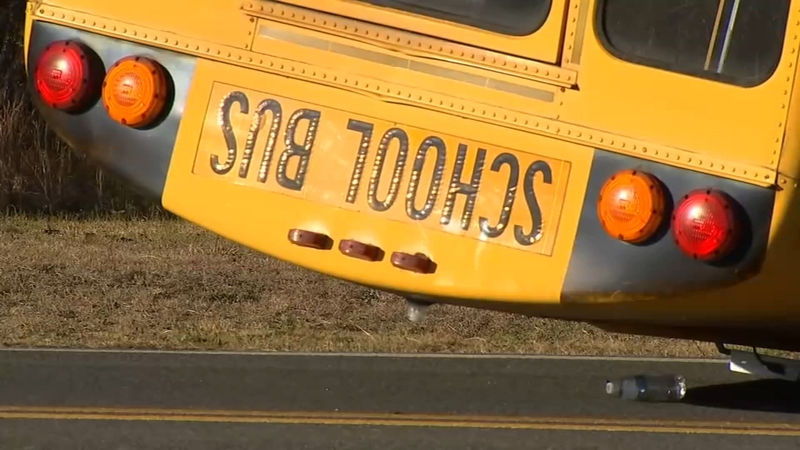 JOHNSTON COUNTY, N.C. (WTVD) -- Several students and the driver were injured Monday afternoon when a school bus crashed and overturned in Johnston County.

Twelve people, including the bus driver, were taken to a hospital. There were 31 students on board.

Their injuries are not said to be life-threatening.

Here’s a better look at that bus full of Cleveland HS students that overturned this afternoon. Thankfully none were seriously hurt but 11 students and the driver did get taken to the hospital #abc11 pic.twitter.com/yzDjawbjuW

It happened about 2:30 p.m. in the 2000 block of Polenta Road near Cleveland High School. The students on board that bus are Cleveland High students.

One student was taken to Wake Med and several others were taken to local hospitals with minor injuries.

The driver was transported to Wake Med Raleigh with serious injuries and remains there in serious condition.

Students who were not injured have been reunited with their parents at Cleveland High School.

The Highway Patrol is leading the investigation into what caused the crash.

State troopers said the bus was going west on Polenta Road when it veered off the road to the right. The driver overcorrected and the bus crossed over the center line and overturned.

The bus then ran off the road to the right and came to rest on its top half on the road, the other half off, the Highway Patrol said. The roadway was blocked for several hours until the bus could be removed.

The road reopened just before 6 p.m.

No other vehicles were involved.

Brenna Dodson, a junior at Cleveland High, was in the media center at the school when it happened.

"We were all in the media center doing math work prep for the ACT tomorrow and someone is like oh my gosh, a bus just flipped over, people are hurt and everybody just started talking about," Dodson said. "It was definitely sad but I'm glad it wasn't worse. Because it could've been a lot worse and it wasn't."