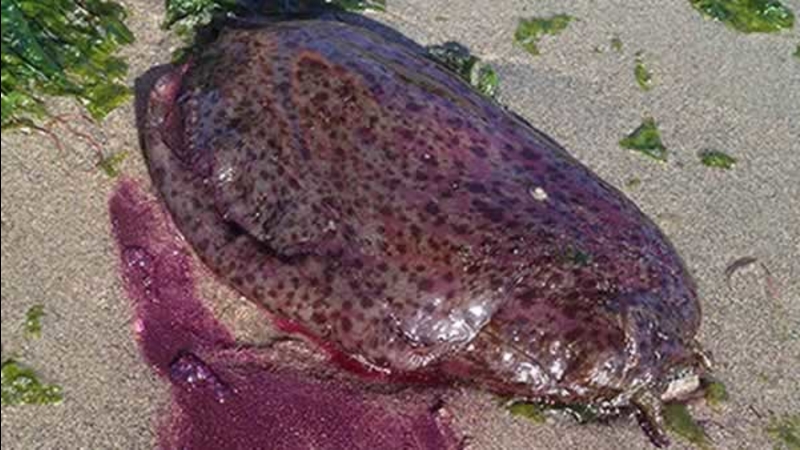 OAKLAND, Calif. -- Giant purple blobs are invading East Bay, California beaches and waterways. They are not a danger to the people, but the slugs' big size is unusual.

They are called sea hares and they can reach up to 15 pounds and almost three-feet in length.

So far they've turned up at Lake Merritt in Oakland, Crab Cove in Alameda and Miller Knox Regional Park in Richmond.

Authorities have received a number of calls about the slugs. One person even called 911 because they were concerned that they had found a little purple heart on the beach. Instead, it was just this little harmless sea creature.

Alameda resident Rachyl Benitez said she didn't know what to make of the purple blobs when she saw them. She said, "They were scattered all over the beach over there. Some were alive, some were dead, some were in the seaweed. They were kind of cool looking. But then it was kind of weird because I'm like, what's going on with our water?"

They usually wash ashore in summer. So staff members at the East Bay Regional Park District say it's unusual to see these slugs show up now in the spring and over what they say is an extended period of time.

"We've been seeing them wash up since September, going all through the winter and now even more in the spring. So perhaps it is because of the warmer water," East Bay Regional Park District naturalist Morgan Dill said.

These slugs are among a few creatures that have been mysteriously showing up on land. A number of whales have been beached in the area recently. And in San Diego, thousands of little tuna crabs have been washing ashore. A researcher there says the crabs may linked to the El Niño effect which means there are warmer temperatures in the Pacific Ocean. Residents who spot sea creatures on land can actually help scientists gather data.

"Participate in citizen science projects and report these things when you see them, so we can see if there are any cyclical changes that are happening," Dill said.

Dill says the sea slugs are purple because they're full of ink and they're not harmful to people.