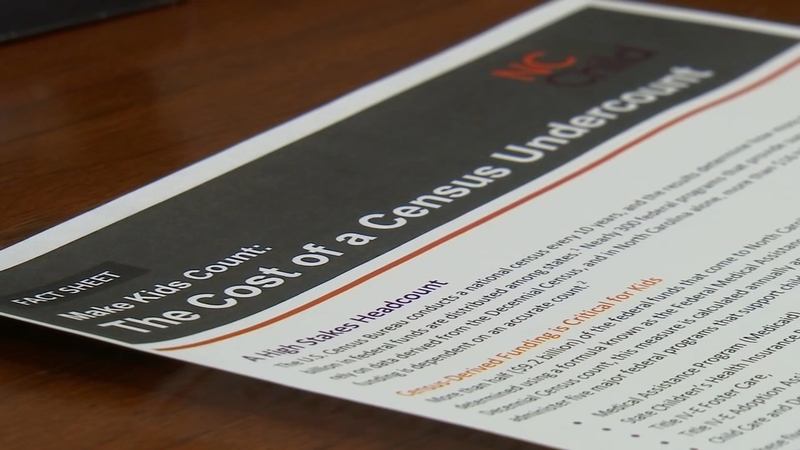 Taken every ten years, the data provided by the survey will affect many areas of our lives.

Child advocates say a full accounting of children in our state is especially important this time around since they believe as many as 25,000 North Carolina children were not counted in the 2010 census.

Even the Census Bureau itself says children nationwide were under-counted.

This statement is posted on the agency's website, "In the 2010 Census, nearly 1 million children (4.6 percent of children under the age of 5) were not counted..."

A look around the Little Believers Academy in Garner illustrates the importance of accurately counting children.

The parents of many of the kids at the Garner and Clayton campuses use federal vouchers to help pay daycare fees.

"We serve a lot of foster care children, CPS children, children that have been in adverse situations that are at risk," Little Believers director Cassandra Brooks told ABC 11.

According to Brooks, the vouchers make a difference for many children statewide.

"Probably 80% of the population receives subsidized funding at the child care centers that we operate. And so that means that parents that are in school, parents that are working maybe lower-income jobs," she said.

So the vouchers not only benefit the parents' attempts to get ahead, they also give their children a head start on the education they will need to also escape poverty.

But that mission takes a hit when all of North Carolina's residents aren't accounted for.

"If people aren't counted in the census and we don't get the funding that comes from that, that funding goes to other states," said Whitney Tucker a data expert for child advocacy group NC Child.

Tucker is spending much of her time these days concentrating on getting the word out about how important is for people to take part in the decennial census.

She says one of the reasons for under-counts is that some people refuse to participate.

"They are paranoid about the government and what they're doing with their privacy and their data and that sort of thing. And they want the federal government to know as little as possible about them," she said and then tried to reassure those people.

"I really want to emphasize especially to those folks that the census is one of the safest data products that we have."

Another reason for under-counting children, according to Brooks, is that some often don't fill out the forms correctly.

And making sure all the children in your household are counted is important even if you don't live in poverty.

Brooks says that's because government assistance can help centers like hers break the cycle of poverty sometimes in older generations and even more often in the next generation.