WTVD
By Diane Wilson and Maggie Green
GARNER, N.C. (WTVD) -- A Wake County couple is speaking out after their son was injured while on his school's playground.

Gary McCabe said his son was seriously injured on a platform on his elementary school's playground.

If you have seen any safety concerns at your child's playground, write to Troubleshooter Diane Wilson here.

In June 2017, McCabe's son was a second grader at Timber Drive Elementary school in Garner.

"They were at recess, and children were playing on the playground as normal," McCabe said. "My child was playing on it. He wasn't hanging from the top row or climbing on the top of it, he was climbing up the ladder. The finish was missing on the ladder and he slipped on that. He hit his shin on the platform, his entire force of his body came down on that."

The protective coating on the platform that McCabe's son fell into was peeling off, which McCabe said caused his son to be so severely injured.

"It cut him all the way to the bone and he required two layers of stitches," McCabe said.

After getting home from the emergency room, Gary said the next day he went to Timber Drive Elementary to talk with administrators and check out where his son was injured on the playground.

"That jagged edge is the protective coating off, that's the rust, and that's the sheet metal underneath it. He fell into it," McCabe said. 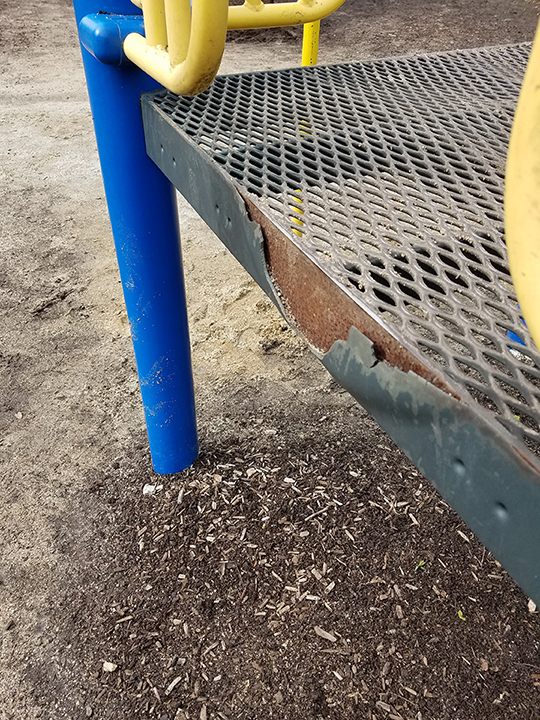 Gary McCabe said his son scraped his leg to the bone while playing on this playground at Timber Drive Elementary School in 2017.

"I asked him if it had been inspected and he said, 'I really don't know. That's handled by the Wake County public school system'", McCabe said.

McCabe said the administrator agreed with his concerns about the playground. One of his simple concerns was the lack of mulch around the playground. "It was a mud hole. The mulch was there as a protective barrier if your child falls off," McCabe said. "You have to have a minimum of six inches of mulch on the playground. There was no mulch it was completely a mud hole. He not only slipped and cut himself on the equipment but then he fell in the mud hole, so they had to spend a lot of time cleaning out the wound in the ER."

McCabe said district officials told him they patch and repair playgrounds as needed, but do not replace the structures in their entirety.

"That was not an acceptable answer to me," McCabe said.

McCabe said he became even more frustrated after the district stopped responding to him. "I called them three times a week for four weeks and never got a return phone call or email," McCabe said. "They went radio silence. They just started ignoring me. They never replaced the playground, they went out with some spray paint and a grinder and cut out the sharp edges. They just ignored me and hoped I'd go away."

McCabe didn't go away. He hired an attorney and said only after that did the school district hand over the inspection reports on the Timber Drive Elementary playgrounds for 2016 and 2017, two inspections before McCabe's son was injured.

On the inspection reports, repairs are given a number 1 through 5, 1 being the repair with the highest priority. The decks that needed to be replaced got a 2 priority, which according to the report meant the possibility of permanent disability, loss of life or limb in a low risk area.

In the 2017 report, inspectors noted that all decks were cracked with a potential for permanent disability on the structure where McCabe's son was injured.

The lack of mulch is also noted on the inspection report in 2017. The report said the area under the ladder must have a minimum six-foot fall zone.

The 2017 inspection report notes an inadequate amount of protective surfacing around the ladder that would prevent a life-threatening injury.

Despite these two inspection reports given to the district from a third party inspector the district hired, McCabe's son still got hurt on the playground. "These aren't cosmetic issues, these are safety issues," McCabe said. "If you get an inspection report and you do nothing with it, what good is that inspection report? Yes, you can check that box, but have you made anything safer?"

According to the Consumer Product Safety Commission 34 child deaths on playground equipment were reported to the agency between 2009 and 2014, the last years for which data is available. Most of those deaths involved hangings or other asphyxiations.

In an online statement dated March 2007, CPSC said:
U. S. Consumer Product Safety Commission (CPSC) staff is participating in voluntary standard activities for ASTM F1487 Standard Consumer Safety Performance Specification for Playground Equipment for Public Use. Past CPSC staff recommendations include those which address the potential for falls from and impact with equipment, the need for protective surfacing under and around equipment, openings with the potential for head entrapment, the scale of equipment and other design features related to user age, layout of equipment on a playground, installation and maintenance procedures, and general hazards presented by protrusions, sharp edges, and pinch points. The staff continues to work to develop strategies to reduce deaths and injuries associated with public playground equipment.

In those years, nearly 1.5 million people went to the hospital with injuries associated with playground equipment. Sixty-one percent of those injuries happened at schools or parks, and fifteen percent were lacerations, like McCabe's son's injury. Fractures make up the largest percent of playground injuries at 34 percent.

Eyewitness News requested playground inspection reports from the past two years from all elementary schools. Nearly two months later, Wake County has not provided those reports.

A spokesperson for the Wake County Public School System said each playground is inspected annually by a third-party company, which submits a report to the facilities staff. If the report notes a repair is needed, a "ticket" is submitted in the district's facilities maintenance system and the "tickets" are prioritized and then processed until a repair is made.

McCabe said his son's injury is proof that the system is not working. He said, "My child was playing on a dangerous piece of equipment that they knew was dangerous and they decided to do nothing. They saw the report and decided not to fix it, that's the problem."

McCabe's wife, Nicole McCabe, said, "Our child could have been hurt so much worse. It doesn't need to come to that. At what point? How many injuries does it take? How many serious stitches and broken bones and broken arms does it need for them to fix the issue that they've known about for years?"
Two and a half years after Gary McCabe's son fell, he said his son still feels the impact of the injury. "He still has no feeling in his shin, in the area that was impacted. He has a really nasty scar."

"The playground is over 20 years old," Gary McCabe said. "I know it's a significant amount of money to replace a playground, but safety is a lot. The safety of our children is worth more than any dollar they are going to spend on a playground. It's not just my kids, it's everybody's kids."

The McCabe family said the school district offered a settlement, but it does not cover all of their expenses, so they are considering filing a lawsuit.

Playground Safety across the Triangle

Eyewitness News wants to know the safety of your child's school playground. Inspect the structure at their school or daycare and look for problems. If you see any, please take photos and/or video and send them to Troubleshooter Diane Wilson.

Do you have safety concerns about your child's playground? Send Troubleshooter Diane Wilson a note here.