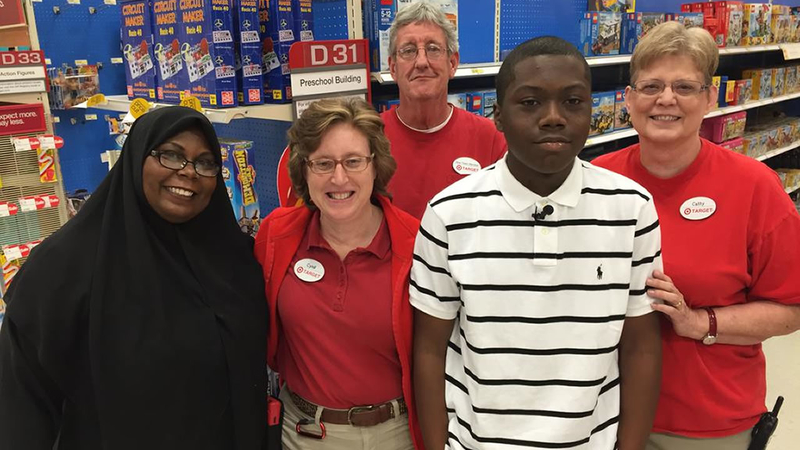 RALEIGH (WTVD) -- There was a surprise reunion at a Raleigh target.

We spent the weekend looking for the mysterious teen that became a sensation when a picture of Target employees helping him prep for a job interview went viral.

Monday, we met Yasir Moore face-to-face and went back to Target to meet the team in red who helped him get interview-ready that day. Moore got the chance to thank the target team that helped him get ready for his first job interview.

The help that was caught on camera, and then the picture went viral. Moore found out about it at school.

Someone saw the story on ABC11 and told him it was all over the internet.

"After I heard it went viral, I was in shock. I was amazed," said Moore. "It's one of the best things that ever happened to me."

"It's a good story," said Moore. "Usually in the world today you don't see a lot of good things that happen."

But that day, in that Target, those strangers showed kindness.

"They could have just sold my son a tie," said Moore's mother, Najirah Parrish, "but they took the time, helped him tie the tie and talked to him. They treated my son with dignity, respect."

They also gave him real world advice to help him get a job.

"I did step-by-step what he told me," said Moore, referring to job advice from the Target employees.

The nervous teen that walked into Target looking for a clip on tie left ready to meet the boss at Chick-fil-A.

"When he told me all this advice, I got my confidence back," said Moore. "And so when I went there, I was calm, cool, and collected."

The folks at Target say they do this kind of thing every day. It's just that this time someone got a picture of it.

"You usually see friends or family help you do that kind of stuff, not just strangers you've never met before," said Moore.

Moore went back for a second interview Saturday, and he did so well they will call him Friday for the next step in the interview process.

Moore told ABC11 that he asked his parents to get him another new tie in case the same manager interviews him.