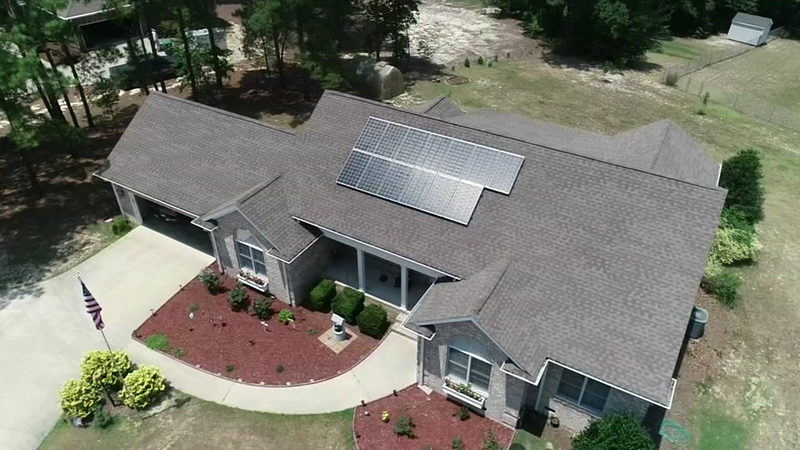 SANFORD, N.C. (WTVD) -- It sounded like a great deal; do something good for the environment while saving hundreds of dollars. That's what Danny and Betty Daniels say they thought would happen when they agreed to have solar panels installed on their roof.

The Daniels' moved into their Sanford home about two years ago.

A few months later they met with a salesperson from Power Home Solar and Roofing. The Daniels say they were told they could save up to $120 every month on their electric bill.

"We wanted to go green if we could. It would be $90 a month for the payment on the solar panels and it'd be $30 a month for the light bill," Danny Daniels said. He says they were told the energy the panels would collect would be enough to power their home and allow them to sell any additional electricity back to the power company.
They paid $17,500 to have the panels installed in March 2017.

Before getting the panels their Central Electric bills ranged from $133 to $276 dollars.

"They got them hooked up and the next month we got the bill and it wasn't good," he said. "I thought well, that's just one month, we'll do it a little while longer and see how this works out. About six months in I really had some questions, I thought this is not going to work."

Over the next year and a half after having the panels installed, their payments ranged between $133 and $289 and they received a total of about $97 in credit from their power company.

The Daniels says they contacted Power Home Solar and Roofing to ask if they could have the panels removed and get their money back. They said they were first told they could pay $6,500 to have additional panels installed. Then, they got an email offering them $1000 for the inconvenience and saying they should wait a few more months to see if things improve.

That's when they reached out to me.

"They just keep buying time on this and we are just kind of run out to the end of the rope right now," he said. "We watch ABC news so we just always see what Diane does and gets their money back for a lot of people."

I contacted Power Home Solar and Roofing and the next day the Daniels' got a call from the company. They agreed not to talk about specific details, but they said the situation was resolved quickly and the panels were removed.

"I just wanna thank you so much. Just as soon as Channel 11 ABC news got involved, we got it resolved in a matter of days" Daniels said.

Power Home Solar and Roofing said they would not discuss details of the case, but sent this statement:

"Power Home Solar and Roofing (PHS) shares the frustration of customers who may be members of certain electrical cooperatives in North Carolina who only return a portion of solar credits to their members. In some instances, the solar energy credits offered by some, but not all, electrical co-op programs in North Carolina are 50% or less than the credits issued by larger power companies.

Customer satisfaction is a top priority for Power Home Solar. To help alleviate the frustration of customers affected by the shortfall of financial savings due solely to their co-op reimbursement policies, PHS has offered a variety of solutions at no charge to its customers. With regard to the customer's situation in question, a solution that was satisfactory to everyone has been reached.

Power Home Solar is hopeful that all North Carolina electrical co-ops will eventually offer their members full credit for solar production so PHS can return to offering solar systems to co-op members who want to utilize clean solar power, save money and generate additional power for their local electrical grid."

If you're thinking about investment in solar panels, it is key to first check with your electric company to see how much they will reimburse you in solar credits.