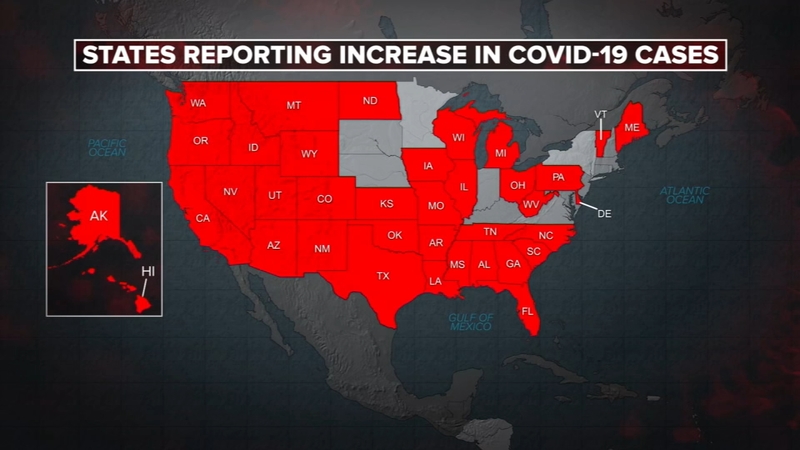 The state hospital association said Monday that hospitals will initiate a bed surge plan if statewide bed utilization reaches 80%. The utilization rate has at times exceeded 75% since the start of the pandemic.

Some children's hospitals have already begun to admit adults to help make room for COVID-19 and other patients.

A Harvard Global Health Institute tool used to track the severity of the outbreak recently ranked the state as the third highest in the country in terms of risk level -- behind only Florida and Arizona -- and the data indicates the virus is showing no signs of slowing down. An ABC News analysis of the data found the state is seeing increases three major categories: cases, hospitalizations and deaths.

In Charleston County, for example, the report warned that there is "no sign of cases slowing down." In Horry County, home to the popular tourist destination Myrtle Beach, "cases continue to sharply rise ... widespread travel to the area contributing to cases," says the report, dated July 4.

South Carolina was one of the first states to reopen on April 24, though Gov. Henry McMaster, a Republican, never fully shut the state down and reopened it without meeting the White House's recommended guidelines. The state also does not have a mask mandate, which the Centers for Disease Control and Prevention recommends to slow the spread of the virus. McMaster's office did not provide comment for this report when reached by ABC News late Tuesday.

MASK TEST: Which masks protect those around you best? Researchers weigh in
EMBED More News Videos

All masks are not created equal, and bandannas are the poorest in the group.

McMaster has previously defended his approach to combating the pandemic. "There are going to be ups and downs," McMaster said during a press briefing on May 28, according to a local news report. "But the effort that we are undergoing in South Carolina is strong, it is thorough, it is well thought out. It has been acknowledged as such and we expect to have success."