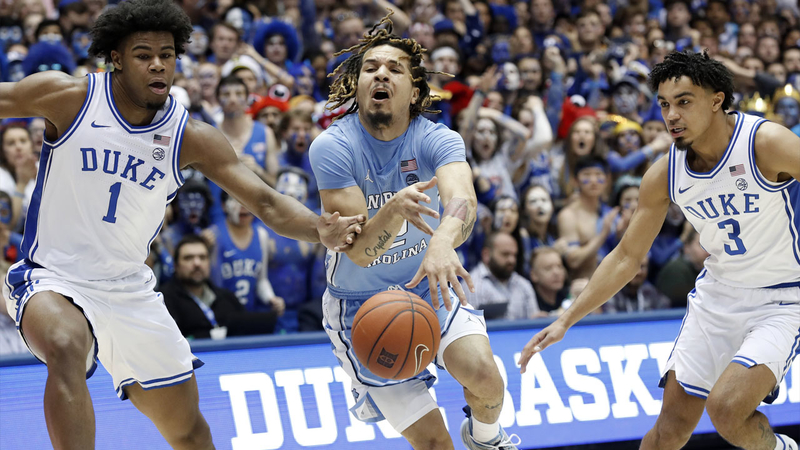 Robinson -- the son of retired NBA great David Robinson -- matched career highs with 13 points and six rebounds to go with a career-best four blocks for the Blue Devils (25-6, 15-5 Atlantic Coast Conference). They never trailed in this one but didn't put away the Tar Heels until the final six minutes.

Point guard Tre Jones added 21 points for Duke in the rematch of last month's overtime classic won by the Blue Devils after two buzzer-beating shots - the first by Jones to force overtime, the second a winning putback by Wendell Moore Jr.

This one didn't have the same highlight-reel drama, but still was a tough rivalry fight. The Blue Devils led by 10 late in the first half, but the Tar Heels hung around and played much of the second half within one to three possessions.

The Tar Heels twice got within a point in the second half before the Blue Devils finally put together their game-clinching 8-0 flurry. The biggest spark came from Robinson, who has earned a growing role in recent weeks off the bench.

With Duke up 72-67, the 6-foot-9 forward hit Carey inside for a dunk, then came up with a key block of Brooks in the paint at the other end. Moments later, he took a crosscourt feed from Tre Jones and launched a 3 to beat the shot clock that swished through the net and sent Cameron Indoor Stadium into a frenzy.

Cassius Stanley followed with a 3-pointer -- fittingly, assisted by Robinson -- that pushed Duke to its largest lead at 80-67 with 3:47 to play.

Duke fans and students took to the streets after the Blue Devils had an 89-76 win over the Tar Heels.

UNC: The Tar Heels had managed to salvage some late-season momentum in a year thrown into disarray amid injuries and close losses, entering this one with their first three-game winning streak since starting 5-0 in November. But this loss dropped them into a tie with Pittsburgh for last place - UNC's first bottom-of-the-league finish since tying for the spot during the 8-20 season of 2002.

Duke: The Blue Devils ended a two-game skid by rolling past North Carolina State on Monday. But their seed for the ACC Tournament was set at No. 4 once No. 22 Virginia beat No. 10 Louisville - Duke lost to both in the only regular-season meetings - in a game that ended as this one got going. The Blue Devils still had plenty of energy in this one, and Robinson is suddenly providing productive minutes off the bench.