College basketball picks: Does being (or beating) No. 1 matter? 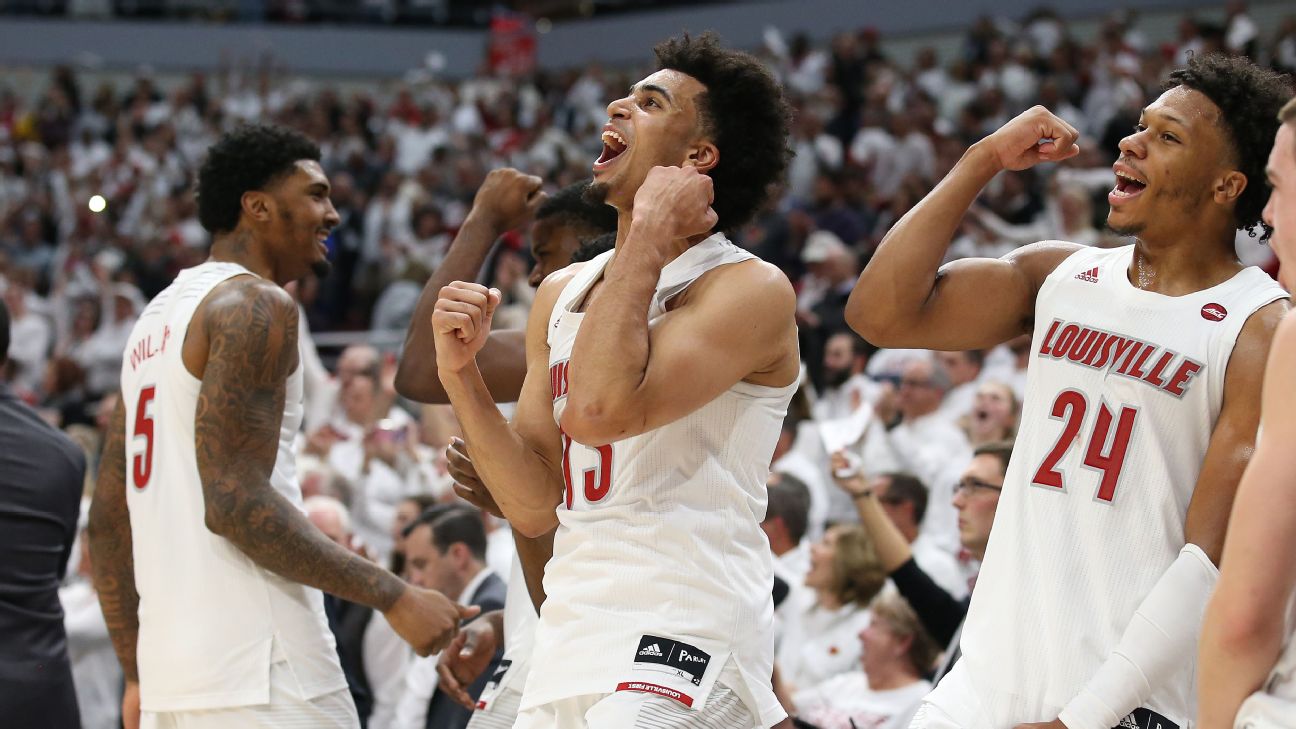 The No. 1 ranking in the Associated Press Top 25 poll for college basketball has already been passed around to four different teams ... and seems destined to change hands again sooner rather than later. ESPN.com's college basketball experts discussed what the phenomenon of being No. 1 means in the 2019-20 season, and made their picks for an intriguing weekend slate of games that features a number of (somewhat polarizing) early conference matchups.

Jump to score predictions for the weekend's top games

One of the big themes of the early season has been the lack of a consistent No. 1 -- Michigan State, Kentucky, Duke and now Louisville have all spent time in the spot. Is it too early to say there's just not going to be a standout team this season in college basketball? Does being No. 1 (or beating No. 1) even matter in 2019-20?

Jeff Borzello, college basketball insider:It's not too early at all, given what we've seen in the first month of the season. The teams that looked that way entering the season have shown major flaws, and the new crop of teams near the top of the rankings -- Louisville, Maryland, Ohio State -- aren't perfect either. I do think the Cardinals are the best team in the country right now, but I don't see them as being a tier above the rest of the country.

Beating No. 1 still matters for at-large résumé purposes (yes, we're already thinking ahead to March), but I don't think being No. 1 matters outside of a program milestone. We've already had four different No. 1 teams and none has lasted more than a week or two.

Myron Medcalf, senior college basketball writer:Certainly not too early. We have a lot of teams that are searching for an identity, albeit without the benefit of last season's talent pool, an asset that made a lot of teams look dominant early in the season. Gonzaga, Duke, Virginia, North Carolina and Kentucky all lost multiple first-round picks from a year ago. One of those squads tends to hover near No. 1 most years but they lost great players and they're not easy to replace. So the typically superior programs seem mortal this season and that should lead to a lot of movement at the top of the polls, but no true juggernaut before the postseason.

John Gasaway, college basketball writer: It is definitely not too early to say that, and, right now, being No. 1 doesn't really indicate much separation between said team (currently Louisville) and the rest of the top six or seven programs. Now, a standout team could emerge: Kansas, the Cardinals, Duke, Kentucky, Maryland, who knows? But every team named there has already either lost a game or at least looked eminently normal at times (Louisville beat Akron by six at home; the Terrapins more or less played an even game the whole way with Temple before winning). No one is standing out, yet.

Jordan Schultz, insider/analyst:Louisville is the best and most complete team in the country, and Jordan Nwora is a bona fide POY candidate. But what we've seen thus far in terms of teetering around No. 1 is a telltale sign of what's to come. We certainly know what we have in teams like Duke, Kansas, Kentucky and even Michigan State: good clubs, perhaps with the potential to become great.

But I'm more interested in the unknown. For example, what happens to Memphis when James Wiseman returns? With their bevy of potential first-round picks, how good are Arizona and Washington? Is Dayton a legitimate Final Four contender? To be sure, inconsistency inside even the top 15-20 is something we should all expect, especially as we try and gauge how good all of the nation's prized freshmen are.

Lots of big conference matchups this weekend, with North Carolina-Virginia (4 p.m. ET, Sunday, ACC Network) leading the way. Do you like the "early" league games?

Schultz:I don't think anyone despises the early season conference games more than me. College basketball around the holidays is about feasting on boatloads of nonconference gems and tournaments. Granted, we still have plenty of that, but I'm not ready to fully appreciate or accept a Virginia-Carolina game in early December -- just as the teams aren't either.

And, just as college football features tune-ups during the first month of its season, conference play among the hoops landscape is about learning who's who. Both the 'Hoos and Heels got smacked this week -- by Purdue and Ohio State, respectively. Why play such marquee -- and significant -- conference games, before head coaches even know what they have, and before teams have actually established a true identity?

Gasaway:Put me down for two cheers on behalf of early conference games. They do feel kind of abnormal, particularly when, for example, Virginia opens its season with a road game at Syracuse. Still, these league games are replacing what would otherwise be, for the most part, pretty undistinguished home games against pretty undistinguished opponents. Yes, Stephen F. Austin ended up winning at Duke, but catching that lightning in a bottle is exceedingly rare. In effect, increasing the number of conference games means, on balance, more good basketball coming to our screens.

Medcalf: I don't like them. But it's not the timing. It's the impact on scheduling. The extended conference schedules are built-in excuses for limiting attractive nonconference matchups. That has been an excuse for years. But I just think we'll see even fewer nonconference meetings between powerhouses now with the longer conference schedules. And I think that's the trend. It's always fun to see good college basketball games, but I also think the early conference games will have an impact on scheduling in the future.

Borzello:I'm torn on this. When I think of conference play, I think of January and February, cold Tuesday and Wednesday nights. So having them in November and December is an adjustment. On the other hand, it gives us much better games in the early part of the season. For example, the first couple of days of the season had Virginia at Syracuse, Notre Dame at North Carolina, Louisville at Miami, etc. In seasons past, games during the first week of the season that weren't part of the Champions Classic were thoroughly average.

This weekend does have some pretty good nonconference games, but North Carolina at Virginia has a little more pop because it's a league game and matters for the ACC title (although neither team looked capable of winning a championship Wednesday night). So I guess I would say it's weird but great for college basketball fans.

Gasaway:Let's hear it for Aaron Nesmith and Brian Dutcher. The Vanderbilt sophomore is making more than four 3s per game while shooting 51% from beyond the arc. Those are Stephen Curry numbers, and Nesmith's doing it with a much tougher 3-point line than what Steph had at Davidson in 2007-08. (Yes, it's early. Again, this is the player of the first month.)

Meanwhile, Dutcher's leading a San Diego State group that's not only undefeated but also (and this is way more important) looking like NCAA tournament material. The Aztecs own neutral-floor wins over Iowa and Creighton and a true road victory at BYU. For significantly overperforming what both humans and laptops expected, Dutcher takes my coach of the month prize.

Borzello:Give me Jordan Nwora as the player of the first month. The Louisville star came into the season as an All-American, but he has taken his game to a new level and has helped carry the Cardinals to an 8-0 record and the No. 1 ranking. Nwora is coming off a 22-point, 12-rebound performance over previously unbeaten Michigan and is averaging 21.9 points while shooting 46.7% from 3.

As for coach, I was going to go with Juwan Howard because of what Michigan did in the Bahamas -- but let's show some love to DePaul's Dave Leitao. Leitao has been on the hot seat seemingly every season, consistently finishing near or at the bottom of the Big East standings. But the Blue Demons are 9-0 after Wednesday's overtime win over Texas Tech, adding to a ledger that includes road wins at Iowa and Wisconsin. Given its upcoming schedule, DePaul should at least enter conference play without a loss to its name. I don't know where the Blue Demons will ultimately finish in the Big East, but for the first month, Leitao's performance has been worthy of praise.

Medcalf: I'm with Jordan Nwora too. He has made 86% of his free throws and he has been a reliable leader for the best team in America. He could have turned pro but instead returned to work on his game, and his entire team has reaped the rewards of his decision. The coach of the year thus far for me is Juwan Howard. He faced a lot of doubters after following John Beilein without any head coaching experience and no experience at the collegiate level. He's off to a great start.

Schultz:I'll cheat and give you two players: Nwora and Nesmith. Nwora, a junior who tested NBA draft waters last spring, is an outstanding blend of perimeter scoring, dizzying transition finishes and clutch shot-making. Nesmith, a sophomore, is a physical 6-6, 213-pound wing who checks the opposition's best player on one end (he averages nearly two steals per game), and then has the chops to go and get you 25-plus on the other. Both players have rocketed up draft boards, thanks to their vast skill improvements and relentless motors.

Coachingwise, I'm not sure how anyone tops Juwan Howard in Ann Arbor. Fourth-ranked Michigan has assumed the identity of its first-time head coach, showcasing a selfless attitude on both ends of the court, while leaning on Howard's stoic confidence to help seal its title in the Battle 4 Atlantis with massive wins over North Carolina and Gonzaga.

(Lines, when available, fromCaesars Sportsbook. Predictors do not have access to lines when making score predictions.) 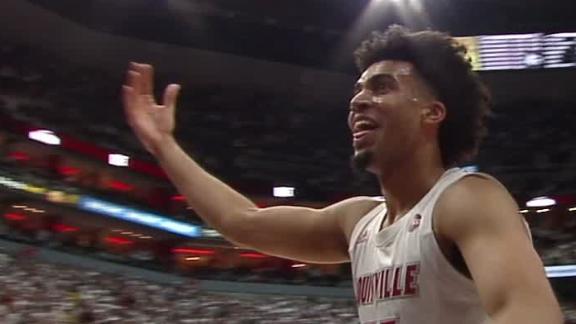