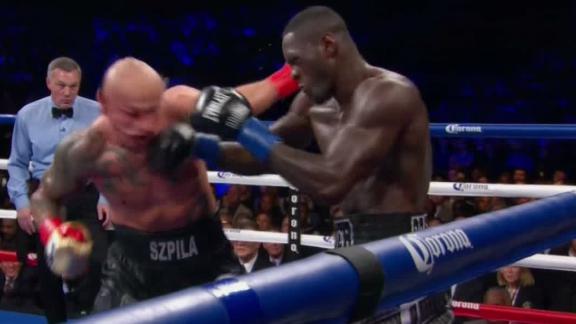 NEW YORK -- Heavyweight titleholder Deontay Wilder's calling card is the power in his right hand, and, oh boy, did he use it to turn out the lights on Artur Szpilka.

With heavyweight legends Mike Tyson and Lennox Lewis, two of boxing's greatest all-time punchers, sitting ringside, Wilder conjured up memories of their big blows when he knocked Szpilka out cold in the ninth round to retain his world title Saturday night before 12,668 at the Barclays Center in Brooklyn.

It was as devastating a knockout as one could score, so big that Szpilka was flat on his back for several minutes following the fight after referee Mike Griffin quickly called for medical personnel, which swarmed him immediately.

Szpilka was eventually taken out of the ring on a backboard, put on a stretcher and taken to the hospital for evaluation.

"I did what I wanted to do," Wilder said. "I gave the people a knockout. My right hand is back."

Wilder, who was leading 78-74, 78-74 and 77-75 on the scorecards at the time of the knockout, retained his title for the third time since winning it from Bermane Stiverne in a one-sided decision 364 days earlier. But Wilder found himself in a dogfight with Szpilka before erasing him with a punch that very well could stand up for the next 11 months as the knockout of the year.

When the bout was over, another fight nearly broke out when lineal heavyweight world champion Tyson Fury, owner of two title belts, entered the ring WWE-style, crashed Wilder's postfight interview on Showtime, and began singing before he and Wilder got into a nose-to-nose shouting match in the center of the ring.

Fury scored a massive upset on Nov. 28, when he outpointed Wladimir Klitschko to end his 9-year title reign. An eventual fight between England's Fury (25-0, 18 KOs) and Wilder (36-0, 35 KOs) would be a big event, but Fury first must deal with Klitschko in a rematch in the late spring or early summer.

Before the craziness with Fury began, Wilder showed his concern for Szpilka by going over to him and not celebrating wildly.

"I told him he was a great contender," said Wilder, 30, of Tuscaloosa, Alabama. "He came to give his all. He gave his all for Brooklyn.

"I always say two prayers. I say a team prayer, and I say an individual prayer. I don't want to hurt a man so he can't go home to his family. We risk our lives every time we step in the ring. He's definitely in my prayers, and I hope he's doing well."

Ronnie Shields, who trains Szpilka, said, "He's doing good. He's awake and knows exactly where he is. He didn't want to go to the hospital, but he's going as a precaution. It's better safe than sorry."

The bout began with each fighter looking to feel the other out. Although they were moving and bouncing and throwing punches, very little was landing in the early rounds. Wilder looked like he had a lot of nervous energy, throwing wild punches and sticking his tongue out.

But the crowd was into it, especially when Szpilka, a 26-year-old former soccer hooligan who was aiming to become the first Polish heavyweight to win a world title, did anything. There was a large Polish contingent on hand, and it broke out in Polish song after the opening round.

In the fourth round, Wilder finally landed a powerful right hand, his best punch, and rocked Szpilka, whose head snapped back. Wilder smiled at him and nodded as if to say he knew he landed a solid punch.

Szpilka (20-2, 15 KOs) had a strong fifth round, landing several powerful shots that forced Wilder back. Wilder rebounded in the sixth by landing a series of hard right hands that left Szpilka, who is 6-foot-3, 233 pounds, with a welt under his right eye as the action heated up.

Wilder landed a clean right hand late in the eighth round, but Szpilka continued to try to pressure him. But Wilder was appearing more and more confident and found the range on his long jab.

He cut Szpilka over the right eye in the eighth round and then came the big shot at 2 minutes, 24 seconds of the ninth round.

"Szpilka fought pretty well and Deontay had a hard time figuring him out," promoter Lou DiBella said. "He had to deal with Szpilka's left-handed style and the fact that he was shorter. It took Deontay time. He didn't start snapping the jab until later in the fight, and then you got the sense he figured out the distance and would catch him. But, God, that was a devastating punch."

Only one punch mattered, but according to CompuBox statistics, Wilder landed 75 of 250 punches (30 percent) and Szpilka landed 63 of 230 (27 percent).

"He was definitely a crafty guy," Wilder said. "I haven't competed against a southpaw in three years. He was a tough competitor, but you're fighting for a world title. It's not supposed to be easy. I'm surprised it took that long, but we had 12 rounds, and they can't all be pretty."

Wilder earned $1.5 million for the fight, and Szpilka's purse was $250,000, with additional money coming from Polish television.

The real entertainment came after the fight with Wilder's confrontation with Fury, the 6-9, 247-pound instigator, who shouted at him, "Any time, any place, anywhere. I'll fight you in your backyard after I beat Klitschko again."

"I would love to fight him next. Unfortunately, I have a mandatory due, [but] make the date, Tyson, I promise you."

Sitting ringside along with Fury was a much more reserved Russian contender, Alexander Povetkin (30-1, 22 KOs), the mandatory challenger who will be the next opponent for Wilder. Povetkin, a 2004 Olympic gold medalist, came to scout his next opponent, to meet the American media and to get a feel for the Barclays Center, which could host the fight in May or June.

Should Wilder and Fury, who left the ring and retreated to a Barclays Center lounge to drink vodka and beer, get past their next formidable opponents, perhaps they will meet to unify titles.

DiBella said he would love to promote it.

"Fury is a wild man. He's a showman," DiBella said. "It was show biz, man. He played with people all night in the arena. For all the bulls--- in the ring, I don't think he had any bad intent. He's good for the game. He and Deontay are both good for the game."