Eric Reid 'without a doubt' to continue collusion case against NFL 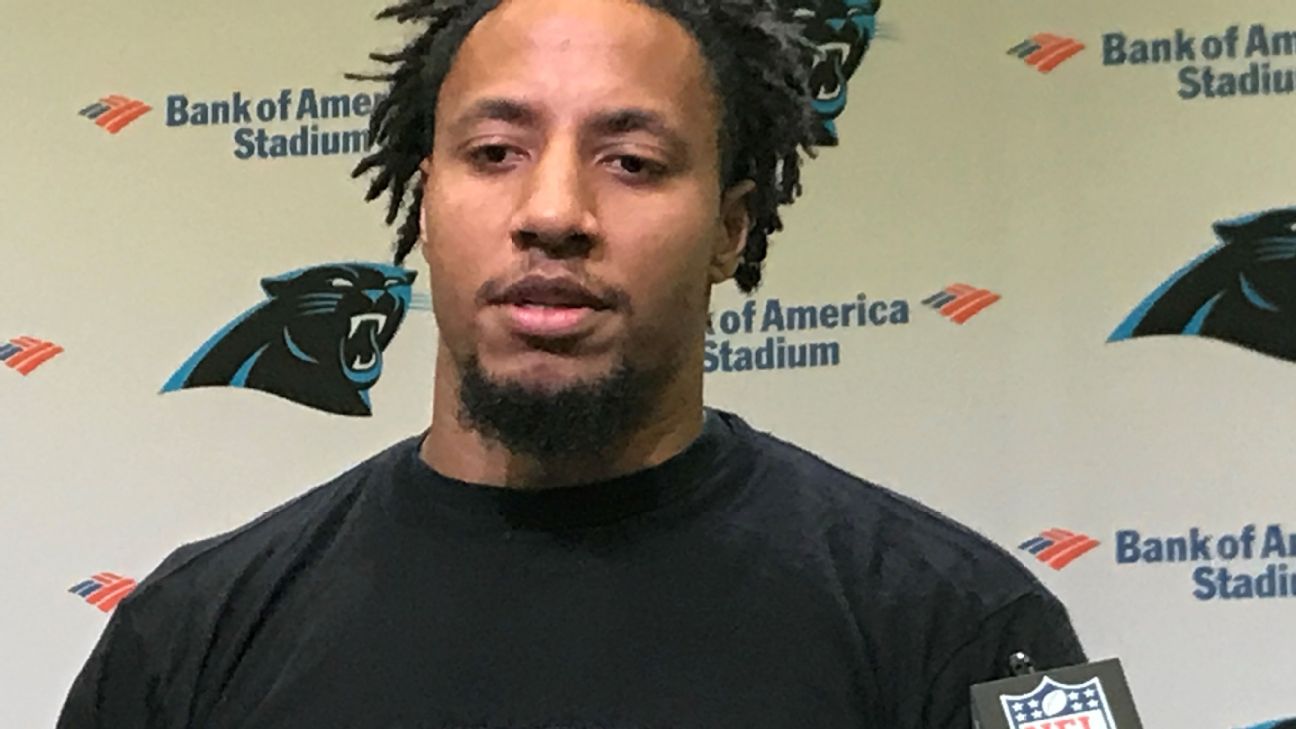 CHARLOTTE, N.C. -- New Carolina Panthers safety Eric Reid, wearing a black T-shirt with #IMWITHKAP on the front, made it clear his fight against social injustice isn't over even though his return to the NFL came quicker than even he expected.

Reid, 26, said "without a doubt" his collusion case against the NFL will continue. He also said he still is considering other ways to protest social injustice outside of taking a knee during the national anthem as he and former San Francisco 49ers quarterback Colin Kaepernick began doing in 2016.

"I'm still evaluating the scope of our country, and I'll make that decision later," Reid said on Monday, his first interview since signing with Carolina on Thursday.

Reid said the Panthers (2-1) didn't ask whether he would protest during the national anthem until after he signed. He said he is not concerned with the reaction of fans during a 2016 game at Carolina's Bank of America Stadium when he and Kaepernick knelt during a Week 2 loss with the 49ers.

"I mean, I felt those emotions time and time again," Reid said. "You can't live in your own house in America without getting killed. It's powerful. I will keep speaking for my people."

The Panthers signed Reid to replace veteranDa'Norris Searcy, who recently was placed on injured reserve after suffering his second concussion in a month.

The 2013 Pro Bowl selection said the Panthers and 49ers were the only teams to offer him a deal. He chose the Panthers "because they had a better offer."

Reid arrived at practice on Monday wearing No. 25 and walking with rookie cornerback Donte Jackson, who like Reid is a former LSU star. He immediately began working with the first team, taking 60 percent of the defensive snaps.

Rivera added he and Reid had a good conversation about how they each feel about protests during the anthem. Rivera, who grew up in a military family, has been adamant that players should stand and show respect even though he's never made that mandatory.

"We feel good about who he is a young man and who we are as an organization," Rivera said."Probably the biggest question he asked me really was, 'What would you say your base fronts of coverage are?' He just seemed ready to roll.''

Reid said he didn't expect to be back in football this quickly. He declined to elaborate much on that or other aspects around his protests because "those circumstances have to do with my case."

"When I got the call I had just finished working out,'' Reid said. "I was, OK, this is surprising.''

In 2016, Reid was the first player to join Kaepernick in kneeling during the national anthem to protest racial inequality and police brutality.

In May, the NFLPA filed a grievance against the NFL on Reid's behalf, alleging that team owners and the league, influenced by President Donald Trump, colluded to prevent his employment because of his protests. Kaepernick, who filed a similar grievance in October 2017, remains unsigned.

Panthers general manager Marty Hurney told ESPN that the team began exploring its options last Monday and brought Reid in to meet with the staff on Wednesday. Asked whether Reid's grievance with the NFL was a factor, he said, "This was a football decision.''

Rivera said the same on Monday, citing the need for a veteran safety.

Rivera wasn't concerned that Reid's past will be a distraction and neither were Reid's new teammates.

Running back C.J. Anderson said what Reid has done in the past doesn't impact him.

Cornerback James Bradberry said it's obvious Reid is knowledgeable about football and can help the Panthers win from what he saw of his new teammate on the practice field and film room.

"I saw some of the things on Twitter and whatnot, but I didn't really listen to most of [that],'' he said. "I don't feel it affects us. We come in to do a job and play football. Whatever else, we'll let it handle itself.''

Reid said he's happy to be back in football. He also made it clear he feels as strong as ever on the issue of empowerment that led him to protest.

"I'll put it this way," Reid said. "Next year will be 2019. It will mark 400 years since the first slave touched the soil in this country. That's 400 years of systemic depression, that slavery, Jim Crow, new Jim Crow, mass incarceration, you name it ... the Great Depression, they came out with a New Deal, black people didn't have access to those government stimulus packages. ... We didn't have access to those programs, the GI Bill, Social Security, home loans, none of that.

"So this has been happening since my people have gotten here. So I just felt the need to say something about it."