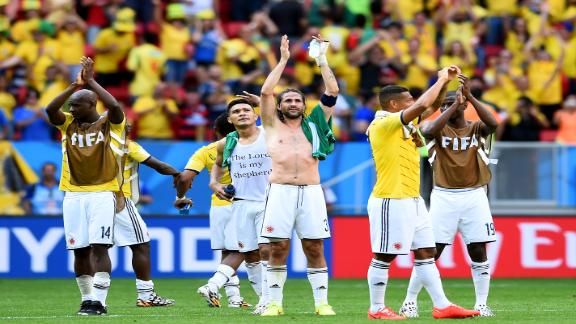 Shortly before the Ivory Coast game, Fiorentina confirmed on their official website that they now fully own the player after concluding a deal with Udinese, who had held a share of his playing rights.

This has increased speculation in the Catalan media that Barcelona are poised to make an offer for the 26-year-old, with Mundo Deportivo saying the asking price was now likely to be around 35 million euros.

Pekerman told FIFA.com that he felt Cuadrado would be an excellent signing.

"He is a player with great physical conditioning who achieved great things with his club, just as he has done with his country," he said.

"He is ready to go to a great club, regardless of how well he does at the World Cup. It's satisfying to have him with Colombia, and for sure he will go on to grace the most important pitches in football -- more so if he goes to a great club like Barca."

Cuadrado, who scored 11 goals and set up five more in 32 Serie A games last season, has also been linked with Manchester United, Liverpool and Arsenal.

Do Colombia have what it takes?
ESPN analyst Gabriele Marcotti discusses Colombia's stacked attack frontline. However, questions remain with consistency and age catching up in the back.