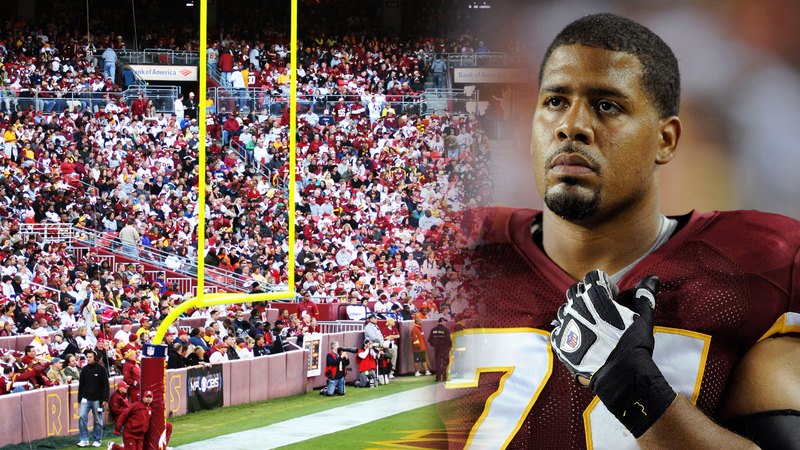 RALEIGH, N.C. (WTVD) -- Washington's NFL franchise announced this week that it would retire its longtime logo and nickname that had been criticized by some for years as being derogatory toward Native Americans. But one former NFL player and Native American Sean Locklear said the name never bothered him.

"I played obviously with the Redskins for a year," he said. "Growing up, no, that was the norm. Yes, there is racism going around but for me specifically, we grew up in a poor community as far as my folks and stuff like that. We had what we had, we didn't know we were poor. That was what was around and how we grew up.

"I was called far more times a derogatory term for African Americans -- that word way more than I've ever been called as far as a Native American,: he added. "You kind of ignore it. It was just, I don't know how to say it, that's the way it was. You were what you were, you embraced it, put it on your back, and we were raised by my mom and she told us these things: words can't hurt and that's oddly enough or sad to say that's the way it was."

Locklear, a former NC State and NFL offensive tackle is a member of the Lumbee Tribe of North Carolina. He grew up a Washington Redskins fan and went on to play for them in 2011.

Like many other Native Americans have said when surveyed about the NFL name and logo, Locklear said his tribe and family took pride in something they could identify with.

Speaking for me personally, we kind of embraced that name. It was never derogatory, never even heard it brought up around family members or anything like that, so for me growing up, that was our team," Locklear said.

Locklear said he never heard anyone use the term "redskin" in a derogatory way.

"It's a hard subject, it's a touchy subject," Locklear said. "It's hard, what do you go to? There's only so many names that you could name. Yes, I would like to see it associated. I would love to see that symbol still on the side of that helmet.

In April, Land O'Lakes announced that after a century, it was removing the image of a Native American woman from its packaging. Now, the Redskins name will disappear from the NFL. Some may see it as progress, but others may view it as a continuation of the marginalization of Native American people.

"As far as Native Americans, we only have so much," Locklear said. "Native Americans didn't get the respect, still don't get the respect, as far as where they came from. Who was in America first and all these other traditions that date way back when? Yes, we embraced (the Redskins name). It was who we were and who we are. We looked at it a,s man, we have a national sports team out there that's wearing an Indian head on the side of their face, that's what we relate to."

Jennifer King is a coaching intern in Washington. She said she's excited to be a part of history and she said believes the name change will ultimately be a great decision.

"I think it's an interesting situation where some people feel honored by it and some people are extremely disgusted by it," King said. "It's a time of change right now in our country, and I'm excited to be a part of whatever we decide to go with."

King said she is excited about some of the changes she has been in recent months.

"For me, personally, it's exciting to see some of the things changing," King, who is Black, added. "For me, I didn't even realize there were things I didn't like or felt disrespected by growing up. Now, it's a time to change it. The whole syrup thing, the Aunt Jemima syrup, I remember growing up -- I hated the image for what it was and I put it in that compartment that that's how things are -- it is what it is. Now, some of those things are actually being changed, and I think it's really cool to see those things happening."

Locklear said he feels the real solution isn't changing the name of a team or a logo, but rather changing people's hearts and minds.

"I was raised off of the Redskins, and people are probably still going to call them that for some time," Locklear said. "But the way things are going, the way things are changing, it's going to change and you just hope that it's the people. I don't think there's any franchise out there, any team out there that's going to cause you to have hate or racism in your heart; it comes down to folks. Until people get it out of their mind and get it out of their brain and stop using it in that way, it doesn't matter to me. The people are still around, the folks are still around.

"I don't think a name change is going to do that much in the beginning," he added. "Until our folks, until people in society get all of this hatred -- because of the color of your skin or where you're from -- out of their hearts and out of their minds, then we will put it on a shelf and see where it goes."
Report a correction or typo
Related topics:
sportsraleighwashington d.c.nc state wolfpackrace relationsnative americanracismsportswashington redskins
Copyright © 2021 WTVD-TV. All Rights Reserved.
TOP STORIES
Gabby Petito lived, worked in NC for more than a year
'Get vaccinated': Apex mom shares heartache of losing spouse to COVID
LATEST: DPS to discuss mandatory vaccines, face masks
Guns, accountability hot topics at Wake sheriff candidate forum
FDA authorizes Pfizer COVID-19 vaccine boosters for at-risk groups
Paddling for Pennies raising money for fallen Clayton firefighters
Show More
Deadline approaching for phone companies to follow new robocall rules
'I loved him so much,' says family of second shooting victim at NCCU
'Beyond crazy': Shaw unvaccinated student tossed from online classes
No sign of Brian Laundrie as search enters day 5
3 men charged after man shot, killed in Raleigh, police say
More TOP STORIES News