Maryland comes up short on offense; Duke might have found a 3-point threat 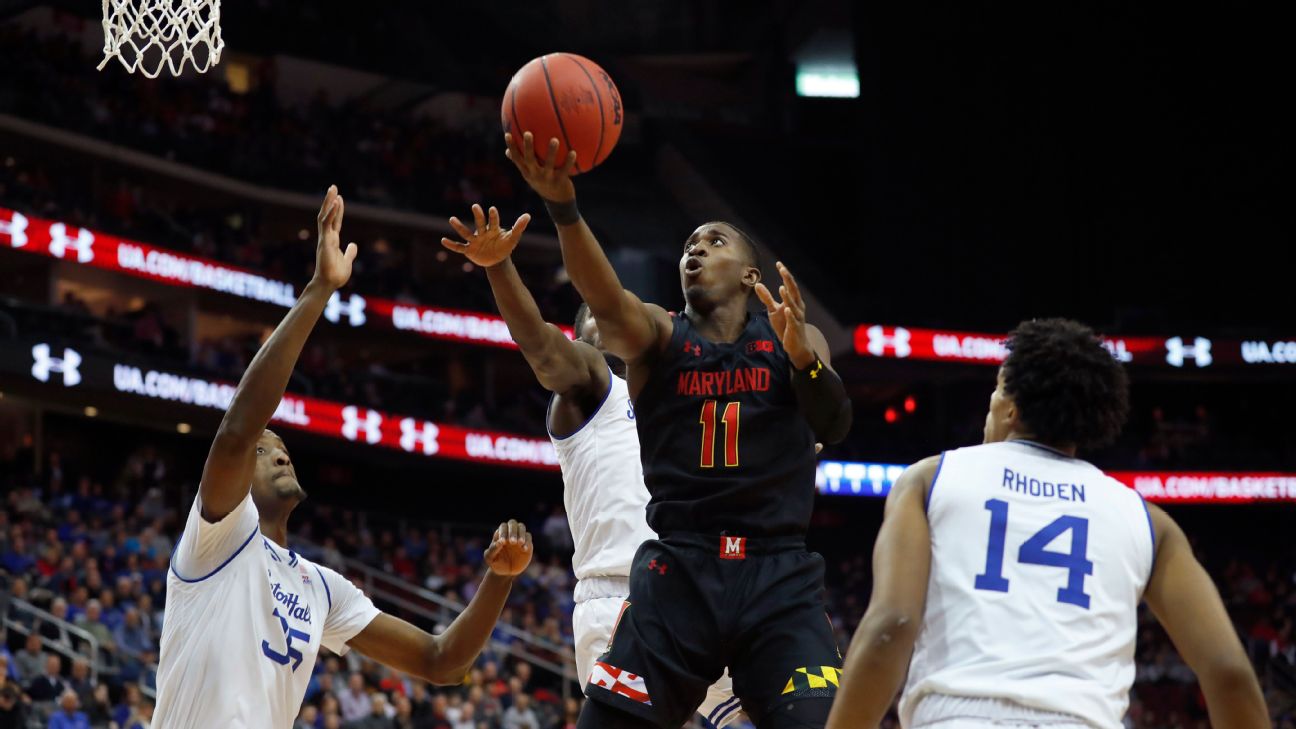 If there's one storyline the 2019-20 season can deliver reliably, it's a ranked team looking very vulnerable in the act of losing to what was supposed to be an underdog.

The season delivered on that front again Thursday night ...

The Terrapins' current crisis on offense is acute and possibly ominous

Maryland was exceptionally fortunate to be held to 42 points over the first 39 minutes at Seton Hall yet still come within a rimmed-out Anthony Cowan Jr. 3-pointer of tying the score in the final seconds. Give Mark Turgeon's team full credit for fighting through a terrible shooting night and playing defense all the while. Still, it wasn't enough, and the Terps fell to the Pirates 52-48.

The loss comes hard on the heels of Maryland's 76-69 defeat at Penn State and drops the No. 7-ranked team in the country to 10-2. Clearly, Seton Hall played excellent defense, but it turns out the Terrapins' woes on offense predate their visit to Newark. In fact, over their past two games, the Terps have scored only 117 points in 140 possessions.

Most worrisome for Maryland fans is the way the offense is underperforming. Simply put, Turgeon's players are giving the ball away again. Turnovers were a recurring issue with this team last season, and over the past two games Cowan, Jalen Smith& Co. have given the ball away on 26% of their possessions.

Turnovers might continue to be a concern even when the Terrapins' shooting improves. Mind you, the shooting will indeed improve because it can't possibly get worse. In the two losses, this offense has made 31% of its 2s. Cowan, for example, is 2-of-12 inside the arc during this brief losing streak.

If there's good news for the Terps, it's that their defense has been sound in both defeats. Not to mention Penn State and Seton Hall both played very well (and the Pirates did so without both Myles Powell and Sandro Mamukelashvili). Just the same, Turgeon's going to have to find the answer on offense. The Big Ten schedule will throw many more challenges this team's way.

Could Joey Baker be the 3-point hero the Blue Devils need?

With his 5-of-7 performance from beyond the arc in Duke's 86-57 win at home over Wofford, Joey Baker is now the Blue Devils' most prolific 3-point shooter. The sophomore has drained 16 3s on the season, not so impressive on a per-game basis, perhaps, but highly impressive when you consider Baker is averaging 14 minutes a game.

The hunt for a consistent 3-point threat in Durham has been ongoing basically since Grayson Allen and Gary Trent Jr. left campus. If the Blue Devils can make opposing defenses respect the perimeter, Vernon Carey will find he has even more room to operate in the paint. (For his part, Carey dominated the much smaller Terriers to the tune of 20 points on only 11 shots.)

Tre Jones missed the Wofford game with what was termed a "minor" foot injury, but, when he has been available, the sophomore is already shown signs of having improved his 3-point accuracy since last season. Between Jones, Baker and Matthew Hurt, things are looking up for Duke from the outside for the first time in a while.

It has been quite some time since we've seen all five of the top-rated freshmen (as ranked by the ESPN 100) play a full freshman season. In fact, James Wiseman's decision to withdraw from Memphis and prepare for the NBA draft means this will be the fourth consecutive year where a top-five freshman has gone missing for a significant portion of the season.

A year ago, Bol Bol appeared in only nine games for Oregon before missing the rest of the season because of a stress fracture. In 2017-18, Michael Porter Jr. played two minutes in Missouri's first game and then sat out the entire regular season because of a back injury. Porter eventually returned for the postseason and recorded 51 total minutes across two games, both losses, in the SEC and NCAA tournaments.

In 2016-17, it was Harry Giles' turn to sit out. The No. 1-ranked recruit in his class nationally, Giles battled knee injuries before arriving in Durham and then missed Duke's first 11 games. When he returned to action, he made only six starts and averaged a mere 12 minutes for a Blue Devils team that ultimately lost to South Carolina in the round of 32.

You have to go all the way back to 2015-16 to find five more or less complete freshman seasons from the ESPN 100's top five: Ben Simmons, Skal Labissiere, Brandon Ingram, Jaylen Brown and Henry Ellenson. So, yes, when that highly sought-after top-five recruit in the Class of 2021 signs with your team, be sure your first wishes are for good health and zero eligibility issues.

Three things for the weekend

The No. 1 team plays a road game for the first time

The teams currently ranked in the AP Top 25 have collectively played 36 games on opponents' home courts, but No. 1 Kansas is yet to have that experience. (No, playing Chaminade in Maui doesn't count. The Silverswords play their home games at McCabe Gym in Honolulu.)

That all-home-and-neutral streak for Bill Self's team will end, however, when the Jayhawks meet Villanova at the Wells Fargo Center on Saturday. The Wildcats will split their home games more or less 50-50 this season between Wells Fargo and their on-campus venue, Finneran Pavilion. If the home of the Sixers isn't enough of a "true" road game for your standards, note additionally that KU's next game will be at Stanford in Maples Pavilion.

Last season in Big 12 play, Kansas was markedly less effective on both sides of the ball in its nine road games. The Jayhawks were notably turnover-prone away from Allen Fieldhouse, and Self's team also allowed a relatively high number of 3-point attempts. Granted, that was a rotation that, with the exception of 23 minutes against Oklahoma, didn't have Udoka Azubuike. Nevertheless, it will be instructive to get our first glimpse of 2019-20 KU playing in a true road setting.

What can Alonzo Verge Jr. do for an encore?

On Wednesday, Verge, an Arizona State reserve, had possibly the best individual game a college basketball player has ever had in a 40-point loss. The junior came off the bench and scored 43 in a game where Saint Mary's blew out the Sun Devils 96-56.

ASU will host Creighton on Saturday, and it's a safe bet Verge will receive more attention in the scouting report than he would have before this week. That tends to happen when you score 77% of your team's points. (For reference, when Wilt Chamberlain recorded 100 points for the Philadelphia Warriors on March 2, 1962, he accounted for 59% of his team's scoring.)

Verge is a junior college transfer from the Chicago area who averaged 26 points his senior season in high school and was named the Chicago Sun-Times player of the year for 2017. He has made three starts in eight games for the Sun Devils, and connected on only three of his first 25 3-point attempts. But Verge is also making his shots at the line and inside the arc (he was 17-of-23 on his 2s against the Gaels), and he already has shown himself to be a good distributor. A 43-point effort is going to be tough to top, but it's likely we haven't heard the last from Verge.

Our annual December focus on the last remaining undefeated teams is shining its light on, among others, Liberty, still undefeated after its 61-56 win at Vanderbilt. The conventional wisdom says next weekend's game at LSU will be the tough test, and that, if the Flames win there (keeping in mind East Tennessee State just won in Baton Rouge 74-63), they could run the table for a long while.

That could indeed be the case. But right now, Ritchie McKay is telling his players not to look past Saturday's neutral-floor trap game against Towson. What's more, McKay is right to be saying it. The Tigers are just 5-5, but Pat Skerry's team lost by a mere six points at Florida. More recently, Brian Fobbs& Co. have won three of their past four. Keep one eye on Liberty's pursuit of perfection this weekend. 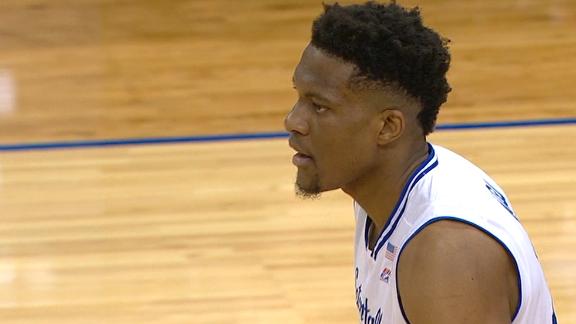 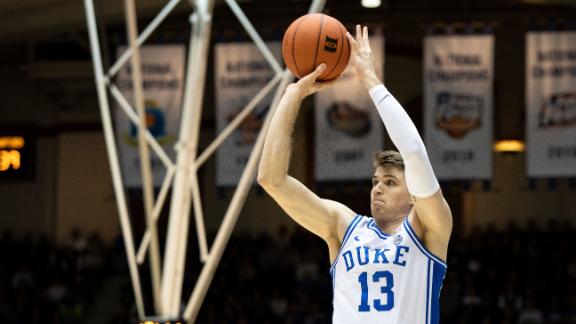