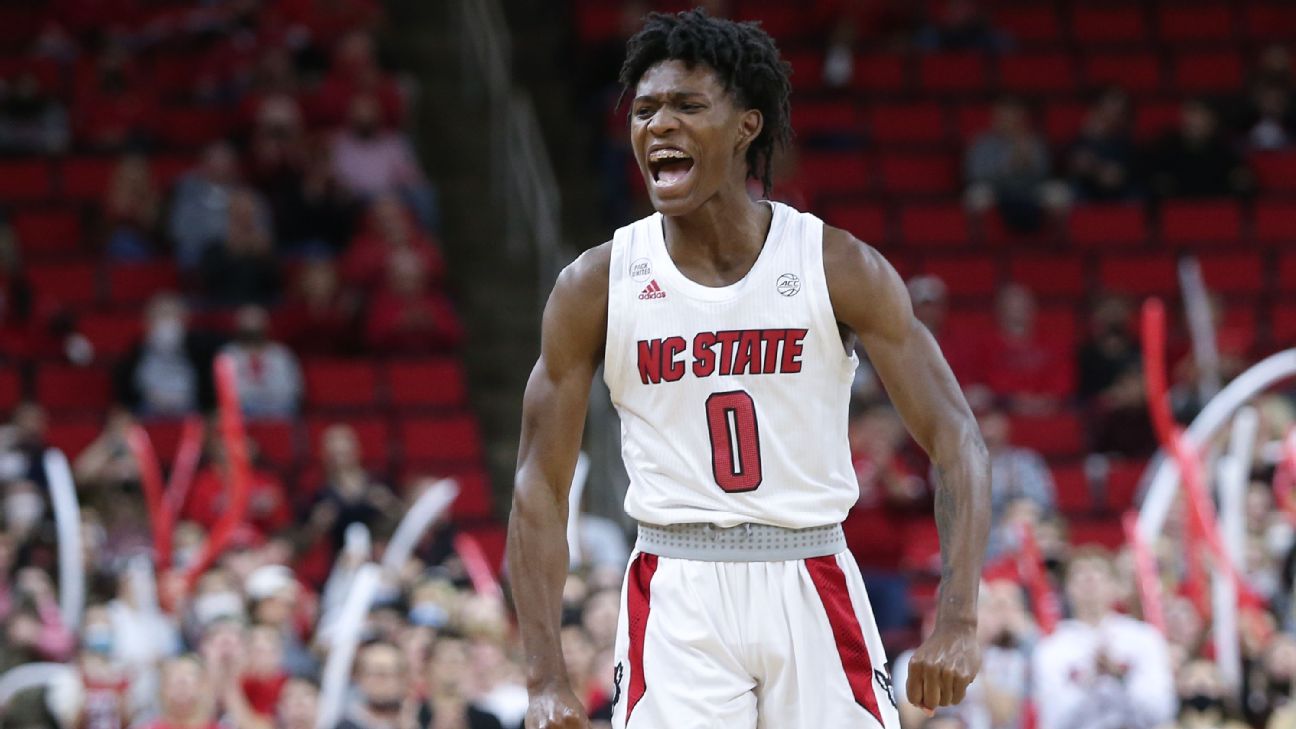 NC Statefreshman Terquavion Smith will declare for the 2022 NBA draft, he told ESPN on Tuesday.

"I plan on entering my name in the draft and getting feedback," Smith said. "I will be working out for teams and seeing how high I can get in the draft. I'm signing with a NCAA certified agent to maintain my eligibility. I want to be taken with a high pick -- top 20. I want to be able to contribute effectively to an NBA team."


Smith, the No. 39 prospect in the ESPN 100, was named to the ACC's All-Rookie Team as well as All-Conference honorable mention after averaging 16.3 points, 4.1 rebounds and 2.1 assists for the Wolfpack.

A late bloomer physically, Smith wasn't considered a major prospect in high school despite his accomplishments, earning offers from only High Point and local East Carolina before committing to NC State.

"I was expecting to have this type of season," Smith said. "I knew I could do it. Everyone doubted me. I learned not to care about rankings, or who is supposed to be better. I just decided to go get it every time. I'm a dog, and I've always been a dog. I've never lacked confidence, and I always bring the energy."

Smith finished as the second leading scorer in the ACC in conference play. His 96 3-pointers led the ACC and ranked as the fourth-highest total in ACC history for a freshman.

"This was a great season," Smith said. "My coaches put me in the right places to score the ball. I was able to come in, showcase my talent and bring energy to the team. I scored the ball at a high level. It was fun adjusting to college and to be able to kill it at this level was great."


The 6-foot-4 Smith, 19, is intriguing to NBA teams with his combination of youth, dynamic shot-making, open-court explosiveness and confident style of play. He puts constant pressure on opposing defenses with his aggressive style, regularly rising up for contested 3-pointers from deep vantage points.

Not considered a one-and-done candidate for much of the season, NBA teams will want to take a closer look at him in private workouts to get a better understanding of his long-term upside, as he played his best basketball late, averaging 21.1 points in his final 10 ACC regular-season games, shooting 41% on 3s over that span.

"I want to do everything in this pre-draft process. I don't have a strategy. I ain't ducking nothing. I ain't running from nothing. I'm looking forward to showing I can handle the ball and I'm a great passer. Guys like Jordan Poole, De'Aaron Fox, Anfernee Simons. That's who I model my game after. Guys who are electric off the bounce, who can create their own shot and shoot the ball."