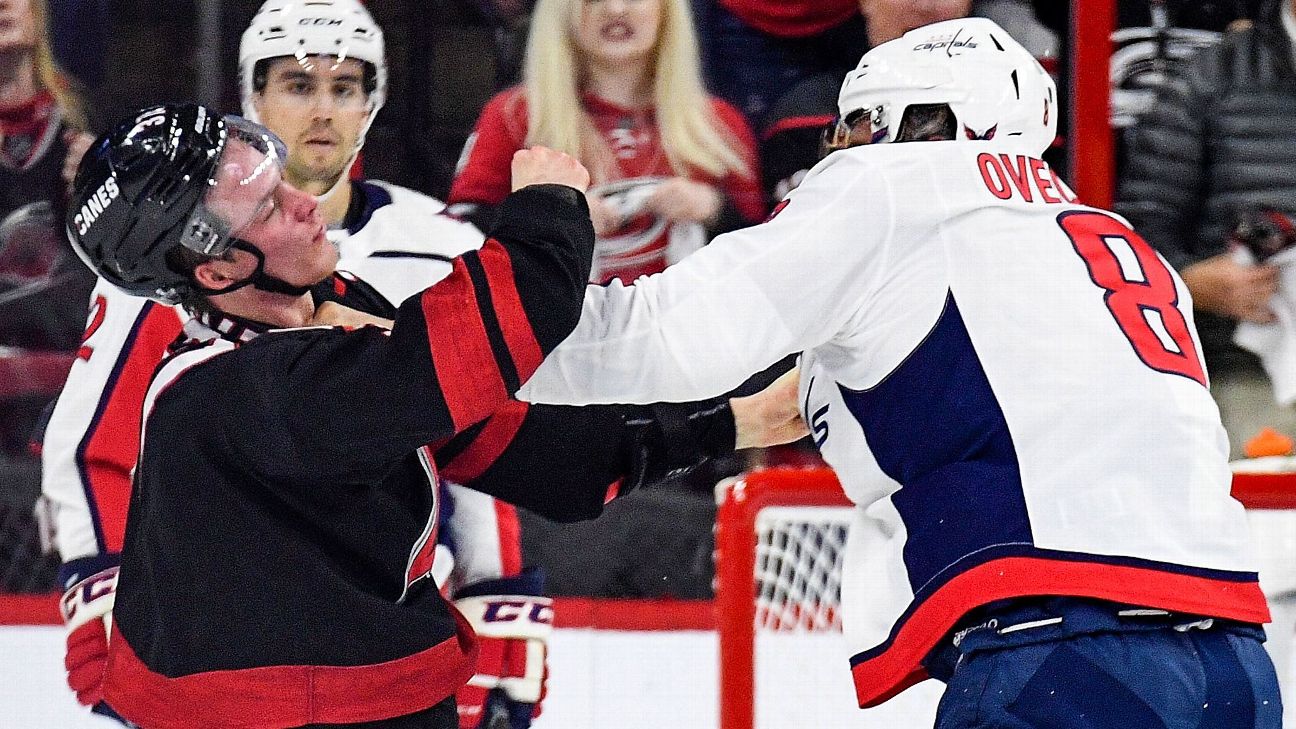 RALEIGH, N.C. -- Alex Ovechkin and the Washington Capitals are looking to defend the Stanley Cup -- and they're not going down without a fight.

Ovechkin fought -- and knocked out -- Carolina Hurricanes forward Andrei Svechnikov in the first period of Game 3 in the teams' first-round series on Monday night.

Svechnikov, 19, is the youngest player in the NHL playoffs this season. A native of Barnaul, Russia, Svechnikov has said he grew up idolizing Ovechkin, his countryman who is 14 years his senior. Svechnikov appeared to provoke Ovechkin, and the two exchanged words before dropping the gloves. Svechnikov got a few jabs in before Ovechkin dropped Svechnikov with three hard rights.

Svechnikov's head hit the ice on the way down. Svechnikov stayed down on the ice for several minutes, then was helped off by Carolina trainers. He did not return to the game.

It was Ovechkin's first fight since Dec. 12, 2010. He received a five-minute major penalty.

"First of all, I hope he's OK," Ovechkin said. "Yeah, I'm not a big fighter, and he's the same. He asked me to fight and said, 'Let's go.' I hope he's OK. You don't want to see a guy get hurt or something. And you just go a different way.

"We got maybe a little bit frustrated and too confident. We just have to forget about it and move forward."

The Hurricanes won their first home playoff game in a decade, routing the Capitals 5-0. Washington has a 2-1 series lead, with Game 4 on Thursday in Raleigh.

Carolina did not have an update on Svechnikov after the game. Hurricanes coach Rod Brind'Amour said Svechnikov had left the building before the game was over.

"Svech means a lot to us. Young kid. Just turned 19. He has a special bond with our group, with me too," Brind'Amour said. "When you see that, it makes you sick. I'm still sick to my stomach about it. ... It's a little bit tough, because I just heard Ovi talk about it; he said our guy challenged him. So, if that's the case, it's a little different. If you watch the video, he slashes him twice -- Ovi, whack, whack -- then Svech gets him back. I don't know if there's words exchanged, but one guy's gloves come off way first. And that's Ovi, not our guy.

"So, it's a little but frustrating, because he got hurt. It's his first fight. He's played 90 games. He's never fought in his life, and I'm pretty sure Ovi knew that. So, that stuff bothers me."

Svechnikov scored two goals and tallied one assist in the Hurricanes' first two games in this series.

Ovechkin won his record eighth Maurice "Rocket" Richard Trophy this season as the league's top goal scorer. He had one goal and two assists in the Capitals' first two games in these playoffs.

"I just hated seeing that. I just hated the whole part of it. Just something you never want to see," Hurricanes defenseman Dougie Hamilton said. "I just feel so bad for [Svechnikov], and hopefully he gets better soon. The game doesn't really matter when something like that happens; you just can't get it out of your head. I just hope he's OK." 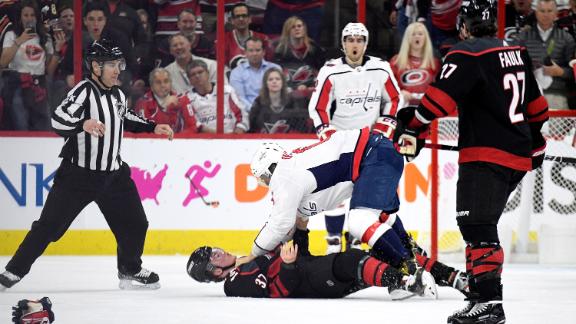