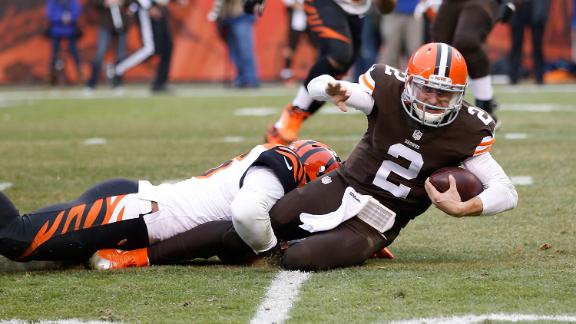 CLEVELAND -- Browns receiver Andrew Hawkins made a strong statement during pregame introductions Sunday, but the statement was criticized by the head of the Cleveland Police Union, who said the Browns owe police an apology.

Hawkins wore a T-shirt over his jersey that read "Justice for Tamir Rice - John Crawford" on the front and "The Real Battle of Ohio" on the back. Hawkins walked slowly on the field with the shirt over his jersey. He took it off when he took part in the pregame coin toss as a team captain.

"It's pretty pathetic when athletes think they know the law," Jeff Follmer, head of the Police Union, wrote in a statement to Cleveland WEWS-Channel 5. "They should stick to what they know best on the field. The Cleveland Police protect and serve the Browns stadium, and the Browns organization owes us an apology."

The Browns released a statement that said: "We have great respect for the Cleveland Police Department and the work that they do to protect and serve our city. We also respect our players' rights to project their support and bring awareness to issues that are important to them if done so in a responsible manner."

Rice was a 12-year-old shot and killed Nov. 22 by a Cleveland police officer while he was carrying a toy gun in a Cleveland park. Rice's death was ruled a homicide by the coroner last week.

Crawford, 22, was shot and killed by police on Aug. 5 in a Beavercreek, Ohio, Wal-Mart as he picked up an air gun in the store.

Browns safety Johnson Bademosi wore a T-shirt a week ago before a loss to the Colts that read "I Can't Breathe," a reference to the last words of Eric Garner, who died in New York after being put in a chokehold by police.

No indictments were handed down in the deaths of Brown, Garner or Crawford. The shooting of Rice is being investigated.

No apology was issued by the Rams, and the players have not broken NFL rules.

Last week, Browns Hall of Fame running back and longtime activist Jim Brown praised athletes for speaking out appropriately against what they feel are injustices.