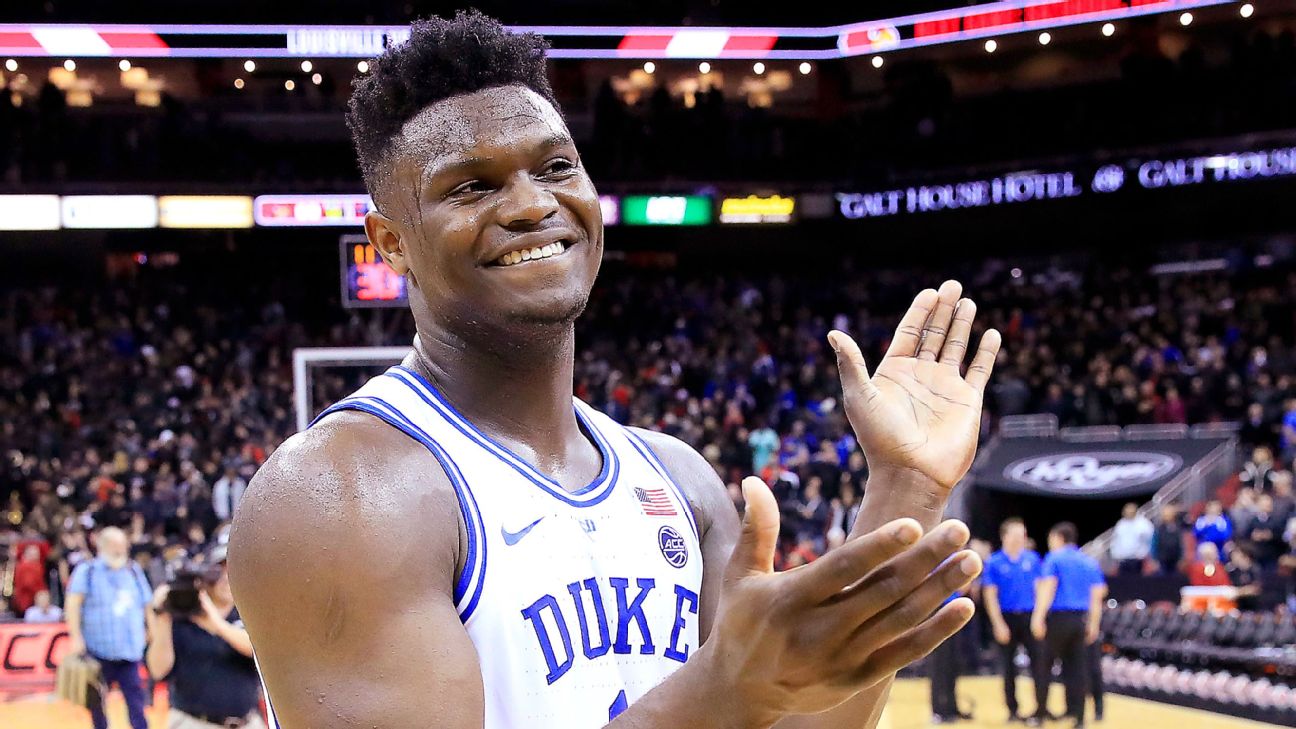 Duke had 36 points in the first 30 minutes of Tuesday's game against Louisville. With just over nine minutes left, the Cardinals led by 23.

The Blue Devils pulled off one of the most stunning comebacks in recent years -- and the biggest comeback by Duke since it erased a 31-point deficit in the second half against Tulane in 1950.

Duke scored almost as many points in the final 9:04 as it did in the first 30:56. The Blue Devils forced 13 second-half turnovers by the Cardinals, turning them into 15 points. Duke scored 18 transition points in the second half after totaling only four in the first half. With 9:13 left in the second half, according to ESPN Stats & Information research, Louisville had a 99.9 percent chance to win the game.

But Zion Williamson and Cam Reddish wouldn't be denied. Williamson, despite being saddled with four fouls for the final nine-plus minutes of the game, scored 14 points in the second half. Reddish scored 16, including the go-ahead free throws with 14 seconds left. Williamson and Reddish combined for 27 of Duke's final 35 points.

We were all set to move Tennessee back to the No. 1 spot after dropping the Volunteers on Monday morning -- but Duke put a stop to that. The Blue Devils' pressure defense was simply overwhelming in the final minutes against Louisville, to the point that no one on the Cardinals wanted to dribble the ball against Tre Jones and the Duke defense.

On a night Michigan and Kentucky both suffered surprising losses, including one in controversial fashion, it was Duke's 23-point comeback -- yet another statement by the Blue Devils -- that stole the show.


Tennessee has been No. 1 in our rankings since mid-January, when the Volunteers escaped against Alabama and Duke beat Virginia. Rick Barnes' team hasn't lost since.

But we're dropping the Vols to No. 2 this week.

We've said since the beginning of last season that these rankings aren't done like the AP or coaches' polls, in which winners rise, losers fall, and that's about it. These are based on an entire body of work, not just how a team is playing now or whom we would take on a neutral floor. And right now, the answer is clear: Duke is No. 1.

The Blue Devils beat Virginia for the second time this season on Saturday, this time in Charlottesville and at full strength. Aside from the fact that Duke has two losses and Tennessee has one, there isn't a category that puts the Volunteers ahead of the Blue Devils.

If Duke stumbles again or Tennessee beats Kentucky twice in the next six games, we could revisit the debate. But right now, it's hard to come up with an argument (besides record) to put the Volunteers ahead of the Blue Devils based on the overall body of work.

We thought Tuesday could be a letdown spot for Duke after the big road win over Virginia on Saturday ... and for 30 minutes or so, it sure looked that way. But the Blue Devils pulled off an incredible rally in the final nine minutes and remain atop the rankings for another day. After an emotional two games for Duke, the Blue Devils return home for two in-state games, against NC State and North Carolina.

Tennessee easily rolled past South Carolina on Wednesday night, despite the Gamecocks hitting 14 3-pointers. Next up is potentially the final top-five matchup of the regular season, as the Volunteers travel to Lexington to face Kentucky. It will be by far Tennessee's toughest road game thus far, as the Vols' only top-60 road win this season is at Florida. The key on Saturday could be Admiral Schofield; Kentucky doesn't really have an answer for him.

Monday was a really impressive bounce-back for Virginia coming off the loss to Duke. The Cavaliers came back late in the second half behind multiple big shots from Kyle Guy. Ty Jerome looked fully healthy after playing 37 minutes against the Blue Devils. He finished with 15 points and 11 assists Monday. Virginia next returns home to face a Notre Dame team the Cavaliers beat by 27 points last month in South Bend, Indiana.

Following a string of uncompetitive blowouts, Gonzaga was finally tested on Thursday -- and the Bulldogs still won by double digits after pulling away down the stretch. Loyola Marymount actually led this game with under nine minutes to go, but Gonzaga'sBrandon Clarke and Rui Hachimura were too much in the end. The two bigs combined for 21 points and 11 rebounds in the second half. Backup point guard Geno Crandall also had some big plays to help Gonzaga get some separation late.

Lost to Penn State 75-69 on Tuesday, vs. Maryland (Saturday)

It's unlikely anyone expected Michigan's worst defensive performance of the season to come against Penn State, but that's what happened Tuesday night. The Nittany Lions got to the free throw line 34 times, grabbed 12 offensive rebounds and held on late in the game. Michigan struggled early, saw coach John Beilein get ejected at halftime and didn't get enough from Ignas Brazdeikis. The Wolverines have now lost three of their past eight games.

Kentucky finally ran into a team that can match the Wildcats' length and athleticism down low, and LSU pulled off the road upset on a tip-in at the buzzer. The Wildcats struggled to shoot the ball from the perimeter, and they never seemed to get into an offensive rhythm, especially in the second half. They have to bounce back Saturday when Tennessee comes to town.

Heading into the season, there was some belief that UMass transfer Dejon Jarreau would help replace Rob Gray's production from last season. A former ESPN 100 prospect, Jarreau ended up missing seven of the first eight games due to suspension -- and he hasn't been consistent since. Over the past two games, though, Jarreau has come alive: He totaled 34 points, 11 rebounds and 12 assists in wins over Cincinnati and UConn.

Lost to Virginia 69-61 on Monday, at Wake Forest (Saturday)

Not only did North Carolina lose to Virginia on Monday, but the Tar Heels also lost Nassir Little in the first half because of a right ankle injury. Fortunately,Cameron Johnsonwas able to return late in the game after he limped to the locker room in the second half. On the court, Carolina didn't get enough from Luke Maye. The senior finished with four points on 10 shots.

It seems the Spartans' slump is officially over. They went into the Kohl Center and pulled away from the Badgers down the stretch en route to an impressive road win. Cassius Winston was once again terrific, with 23 points and six assists.Kenny Goins and Nick Ward provided some balance down low. Coach Tom Izzo's team has a chance to build some momentum with two home games before a trip to Michigan.

It will be interesting to see what the committee does with the Wolf Pack. They were a 4-seed in the bracket reveal Saturday despite getting out to a 23-1 start. However, they lack quality wins. Their best wins are over Utah State and Arizona State, two teams that aren't locks to make the NCAA tournament. Nevada's big remaining chance comes March 2 at Utah State.

If you had told coach Bill Self at the beginning of the season that he would be closing out an overtime Big 12 road win with a lineup of Devon Dotson, Charlie Moore, Ochai Agbaji, K.J. Lawson and David McCormack, he would have had to assume things weren't going according to plan. Thanks to a combination of ineligibility, injuries and foul trouble, those were the five available scholarship players late on Monday -- and it somehow worked. Dotson was terrific in the extra period, and the Jayhawks came out with a key road win over TCU.

Another Marquette game, another massive Markus Howard performance. The All-American guard had 36 points on 21 shots against DePaul on Tuesday night, marking the fourth time in the past five games Howard has hit the 30-point mark. The Golden Eagles have the rest of the week off -- and coach Steve Wojciechowski has to hope Howard won't cool off during the break.

Lost to Maryland 70-56 on Tuesday, vs. Penn State (Saturday)

Well, that was stunning. Louisville had one of the more shocking late-game meltdowns Tuesday night, blowing a 23-point lead in the final nine-plus minutes. The Cardinals simply couldn't deal with Duke's pressure and they didn't have anyone to step up and calm things down or make a shot in the final minutes. Looking at the bigger picture, Louisville has now lost three of its past four.

LSU just missed moving into the rankings after beating Auburn on Saturday, and the Tigers earn a spot after winning at Kentucky on Tuesday onKavell Bigby-Williams' tip-in at the buzzer. They didn't have a great nonconference profile, with their best win coming on a neutral site against Saint Mary's. But they're 6-1 in road games and now have a true marquee win on their ledger.

The Cyclones were on the wrong side of history on Saturday, as TCU's win was the Horned Frogs' first road win over a ranked team since 1998 -- and only the second in program history. Iowa State shot just 29.2 percent from 3-point range and had its worst defensive performance since a loss at Iowa in early December. If the Cyclones harbor Big 12 title hopes, Saturday's trip to Kansas State is a must-win. 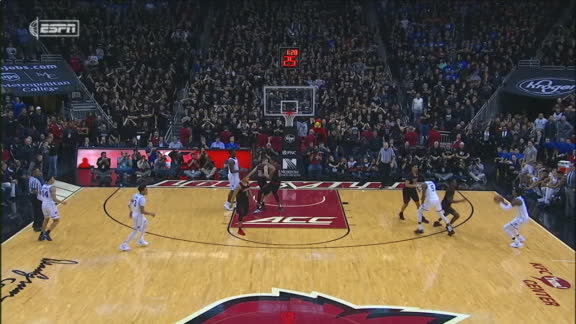 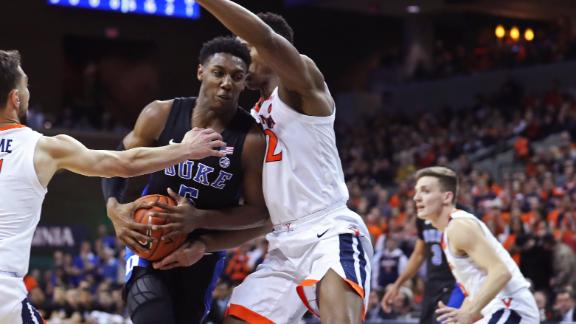