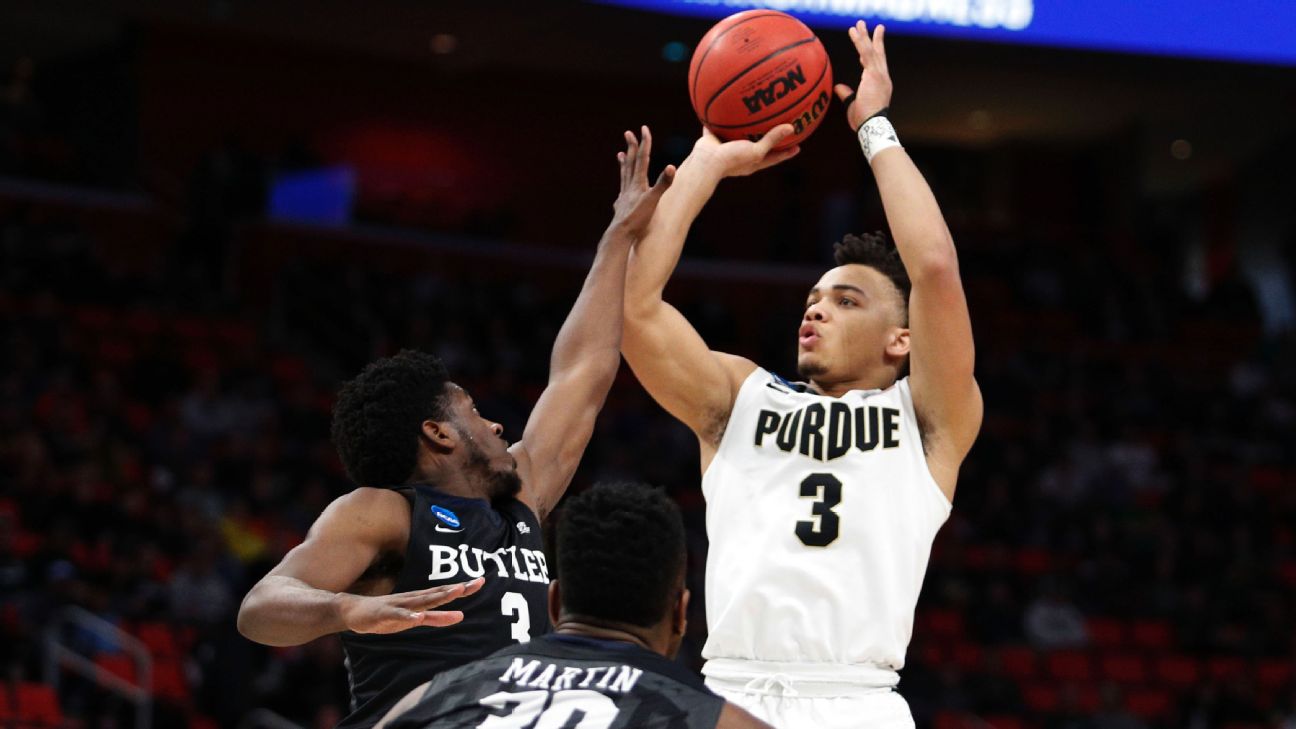 Carsen Edwards went through the NBA draft combine and multiple workouts before deciding to return for his junior season at Purdue.

The Boilermakers are surely happy he did after losing four seniors and most of their scoring.

The 6-foot-1 Edwards was a third-team All-American last season after averaging 18.5 points, 3.8 rebounds and 2.8 assists. He's expected to play a bigger role as the leader and go-to player on a young team.

"He's a very dynamic player. He's unique from a physical standpoint," Purdue coach Matt Painter said. "He's kind of got the body and the explosiveness like a Saquon Barkley. He plays through his offense. I think for guys like that, as you get older, you get more experience, more responsibility, but you don't change who you are."

Like Edwards, Maye was a third-team All-American who entered his name into the draft before withdrawing. Last season, the 6-foot-8 forward averaged 16.9 points and 10.1 rebounds while shooting 49 percent from the floor and 43 percent from 3-point range.

Maye hit the shot that beat Kentucky to send the Tar Heels to the Final Four as a sophomore during their 2017 title run.

"I don't know how much more we can ask of him," North Carolina teammate Kenny Williams said. "I mean, 17 and 10, that's hard to do, especially in the ACC."

Barrett arrived at Duke as the marquee player in coach Mike Krzyzewski's latest stellar recruiting class. An athletic 6-7 forward from Canada, he was widely regarded as the top recruit in the 2018 class and has been projected as the No. 1 overall pick in next year's NBA draft.

"Besides his ability, he has a passion to compete," Krzyzewski said. "This young man has it. I love him, and I'm glad I'm going to have the opportunity to spend some time with him."

Lawson averaged 17.5 points and 9.6 rebounds in two seasons at Memphis before opting to transfer to Kansas. The 6-8 swingman is expected to have a huge impact on the Jayhawks after sitting out last season, both in leadership and multiple roles on the floor.

"He needs to be able to play everywhere for us," Kansas coach Bill Self said. "There's times where he can be our best point guard. I think there are times he could be our best low-post scorer, so we've got to move him around and come up with some creative ways to do that."

Martin and Happ are the first players to tie for the fifth spot on the AP All-America team since 2012-13.

Martin became Nevada's first preseason All-American after testing the NBA draft waters with his twin brother, Cody, during the offseason. The 6-7 senior averaged 18.9 points, 5.4 rebounds and 2.6 assists while leading the Wolf Pack to the Sweet 16 of the NCAA tournament. Nevada has its highest preseason ranking in program history at No. 7 entering this season.