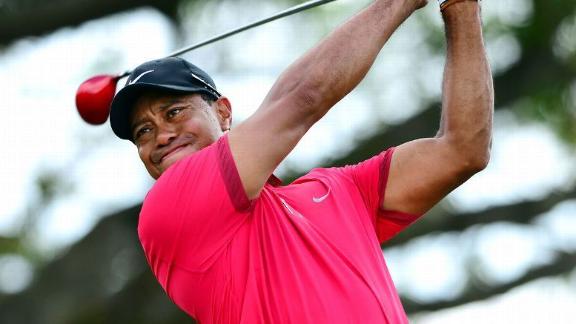 PONTE VEDRA BEACH, Fla. -- Tiger Woods said Monday that his recovery from back surgery is a "slow process" and that he remains unsure when he will return to competitive golf.

In an extensive blog post on his website, Woods expressed regret at having to miss the defense of his Players Championship title this week at TPC Sawgrass but relief over having microdiscectomy surgery on March 31.

"I made the decision to have surgery because physically I just couldn't make a golf swing," Woods wrote. "That pretty much sums it up."

As for his rehab and return, Woods wrote: "I really don't know. I'm doing everything I can and listening to my doctors and working on a strength program, and then we just have to see how my back is. Some people heal up in three months, some people take longer. I just don't know.

"I haven't used a sand wedge yet. I've just done putting and chip-and-runs using the same length of motion. I haven't really rotated yet. As far as taking a full swing, I have conference calls with my doctors every couple of weeks to see how my progress is and just kind of chart it out from there. Basically, you just follow a program. It's tedious because it's little rehab stuff, but you still have to do it.

"That's where I think the experiences of having gone through the surgeries in the past have really helped because you have to lay the foundation down first before you can do the more arduous activities and then return to form. I'm walking and able to cycle now and started swimming last week."

Woods has played in just four tournaments this year, experiencing back issues at the Honda Classic in March, where he withdrew during the final round. He attempted to play the next week at the WGC-Cadillac Championship and shot a final-round 78 to finish 25th. His back issues were again apparent, and two weeks later he decided not to defend his title at the Arnold Palmer Invitational. He then withdrew a week before the Masters, citing the back surgery.

Woods' agent, Mark Steinberg, said at the time that a summer return was the hope, and Woods reiterated that in his blog post, although he did not specify a tournament. Next month's U.S. Open at Pinehurst would appear to be in serious doubt now.

Woods congratulated Masters champion Bubba Watson for his victory at Augusta National and said he didn't miss playing in the tournament as much as one might think.

"I've missed major championships before, so this was not a new experience," he wrote. "It helps when I'm physically unable to play the game. That's when it's easy for me, and I don't have a problem watching. It's when I'm playing and closer to getting back out there is when I start getting real antsy about watching events: 'Can I play, can I not play?' But when I'm physically unable to play, like in 2008 after my knee surgery, it makes things so much easier."

Woods also noted that he had the same procedure as Tony Romo and has been in contact with the Dallas Cowboys quarterback; that he is trying to rehab along with Lindsey Vonn, his girlfriend and an Olympic skier who is recovering from knee surgery; and that he's spent a great deal of time with his kids, Samantha and Charlie, who is a budding golfer himself.

"Once I begin swinging a club again, I'm not sure if I will have to make any changes to protect my back," Woods said. "That's up to [coach] Sean Foley and me on what we do. As far as limitations, it's a building process, just like when I came back from my knee and Achilles injuries. You start from the green and work your way back: putting, chipping, pitching, wedging, mid-irons, long irons, woods and eventually playing. That's all a process and takes time. We have to make sure my back heals fine and I have the strength and mobility going forward."