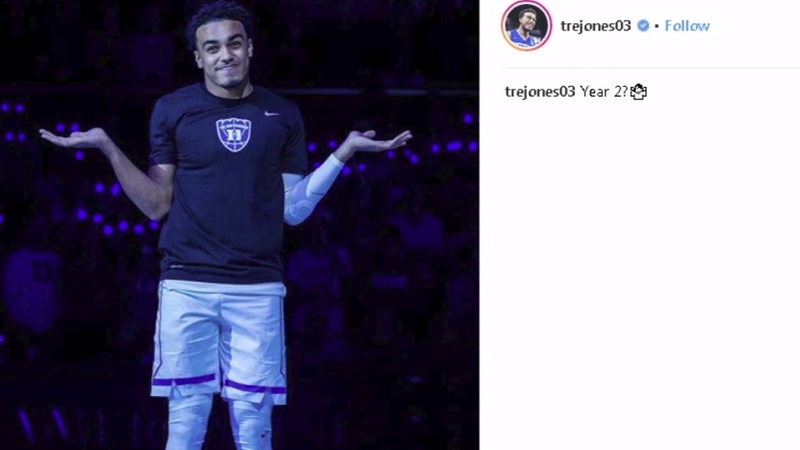 DURHAM, N.C. (WTVD) -- Tre Jones is a nice kid from a nice family, so when he posted on Instagram during the weekend, it sure seemed to indicate he was returning to Duke for his sophomore season.

"Year 2?" didn't seem so much a question as an announcement that he was coming back.

He surely didn't seem like the type to post that and then pull the rug out on Duke fans by going pro.

Duke wouldn't officially confirm the news at the time, but they have now. At 5:30 p.m. Monday, definitive word was delivered via the team's Twitter account.

Jones' decision gives Mike Krzyzewski a returning point guard for the first time since Quinn Cook back in the 2013-14 season.

Even then, Quinn wasn't the forceful personality and player he'd become the following season. Continuity at a position of importance like point guard should be a great asset to the Devils next year.

Jones is a crafty facilitator (3.53 assists per turnover) and dogged on-ball defender. The sizable hole in his game is his outside shooting. Tre will undoubtedly be looking to improve on his relatively ghastly 26 percent 3-point shooting from this year.

New faces such as Vernon Carey, Boogie Ellis and Wendell Moore will likely provide some first-year star power. The Devils may also add 5-star forward Matthew Hurt on April 19 when he announces.