What to expect from college basketball's new 3-point line 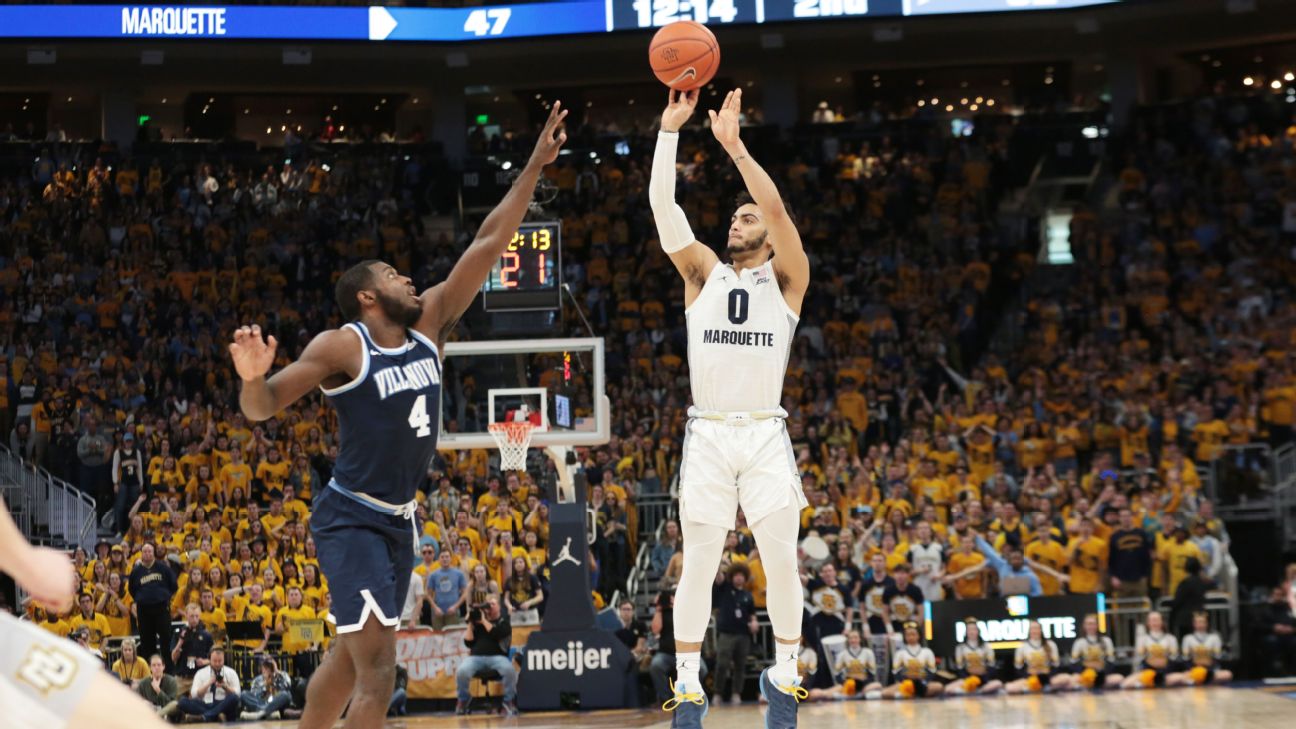 ESPN
By John Gasaway
For the second time in just over a decade, the NCAA has moved the 3-point line away from the basket. Starting with the 2019-20 season, men's Division I basketball will use the same distance for 3s as the one seen in FIBA competitions.

The new 3-point distance is 22 feet and 1.75 inches from the center of the basket, meaning the line is being pushed back by more than 16 inches. This change is a bit more significant than what we saw before the 2008-09 season, when the line was moved out one foot. The current change represents roughly a 7% increase in distance, whereas the previous revision clocked in at a 5% increase.

Fans of Penn State and Texas, for example, are already familiar with the "new" 3-point line, because those teams won the 2018 NIT and 2019 NIT, respectively. The NIT used the new line in each of the past two seasons to give the NCAA data on what the change would mean. Based in part on that information, the NCAA decided to make the move.

Here's what you can expect to see this season with a new 3-point line:

The new line will become a nontopic almost immediately

We may hear about the new 3-point distance when and if a top-25 team has a dreadful shooting night from the perimeter in November, but otherwise there will be much more to talk about than a line on the floor. This is how the change played out at the beginning of the 2008-09 season, and it's also what took place during the new line's experimental use in the 2018 and 2019 NITs.

The change was made in hopes of improving quality of play

One hope behind the new line is that it will space the floor and allow offenses more room for drives and for cutting without the ball. Freedom of movement has been an NCAA point of emphasis for years now, and the new line is the latest reform aimed, in part, at furthering that particular goal. The thinking here is that, paradoxically, making 3-point shots longer and thus more difficult to make can actually benefit offenses at the expense of defenses.

This is more or less what we saw in the NIT in 2018 and 2019. Predictably, 3-point accuracy suffered a bit with the new line, as shooters made just 33.5% of their tries from the perimeter. Nevertheless, overall efficiency on offense was fine, as teams across the two tournaments averaged 1.05 points per possession, a hair better than the 1.04 listed at kenpom.com as the figure for Division I as a whole in 2018-19.

One stat to watch across the entirety of Division I this season would seem, at first glance, to have little to do with 3-point shooting. Just the same, watch the collective turnover rate posted by all 353 teams. In the 2019 NIT, for example, that number checked in at a notably low 16.6% and fueled a good deal of the efficiency displayed by the competing offenses.

The last time the 3-point line was moved, Stephen Curry was in the middle of his career at Davidson. As a sophomore in 2007-08, he set a record that still stands by making 162 3-point shots in a single season. The line was then moved before his junior season, and Curry hit 130 3-pointers. That looks like a big drop, but keep in mind Curry's junior year still ranks among the top 40 3-point shooting seasons for volume by any player (with either line) since 1992-93, according to data at sports-reference.com.

(It is also worth noting that Curry went from playing combo or shooting guard to point guard over the course of those two seasons. As always, there are more factors in play behind 3-point production than simply the location of the line.)

If we define a "high-volume" 3-point shooting season as one in which a player makes 95 or more 3s, we find that there will be, on average, about 30 of those players nationwide in any given 21st-century season. The last time the 3-point line was moved, the number of high-volume shooters declined from 2007-08 to 2008-09, but only very slightly, from 40 to 36. This season, looking at high-volume shooters like Detroit Mercy's Antoine Davis or Marquette's Markus Howard, it's reasonable to expect that they will, for the most part, just keep doing what they do, even with a new 3-point line.

Average and less effective shooters will be hit hardest

The share of Division I shot attempts that are launched from behind the 3-point line will in all probability drop this season, and a large part of that shift will be players (and coaches) saying no to shots from more than 22 feet out when those same shooters might have said yes from less than 21 feet.

The best and most confident outside shooters were, of course, already taking a healthy share of their attempts from beyond 22 feet even with the "old" line. Conversely, it's a given team's second and, especially, third, fourth and sometimes fifth perimeter options who will now be thinking twice about taking that 3.

With a new 3-point line for 2019-20, teams will have one more thing to think about, particularly early in the season. If history is any guide, however, the new line will soon be accepted, 3-point attempt rates will tick downward initially and then eventually resume their upward climb, and fans will quickly go back to arguing over whether a team should foul when up 3 in the closing seconds.
Report a correction or typo
Related topics:
sportsespnnorth carolina tar heelsdetroit mercy titansduke blue devilslouisville cardinalsmichigan state spartanskentucky wildcatsmens college basketballmarquette golden eagles
Copyright © 2020 ESPN Internet Ventures. All rights reserved.
More Videos
From CNN Newsource affiliates
TOP STORIES